Condos, Rental, Office Towers, and More Coming Together at The Well

A skyline of cranes occupies a full Downtown Toronto city block stretching west of Spadina Avenue between Front and Wellington streets, as construction of The Well advances, bringing seven towers to the former site of The Globe and Mail’s offices and printing plant. The complex will be home to a 36-storey office tower along with residential rental and condominium buildings rising 14, 16, 16, 22, 39, and 46 storeys. 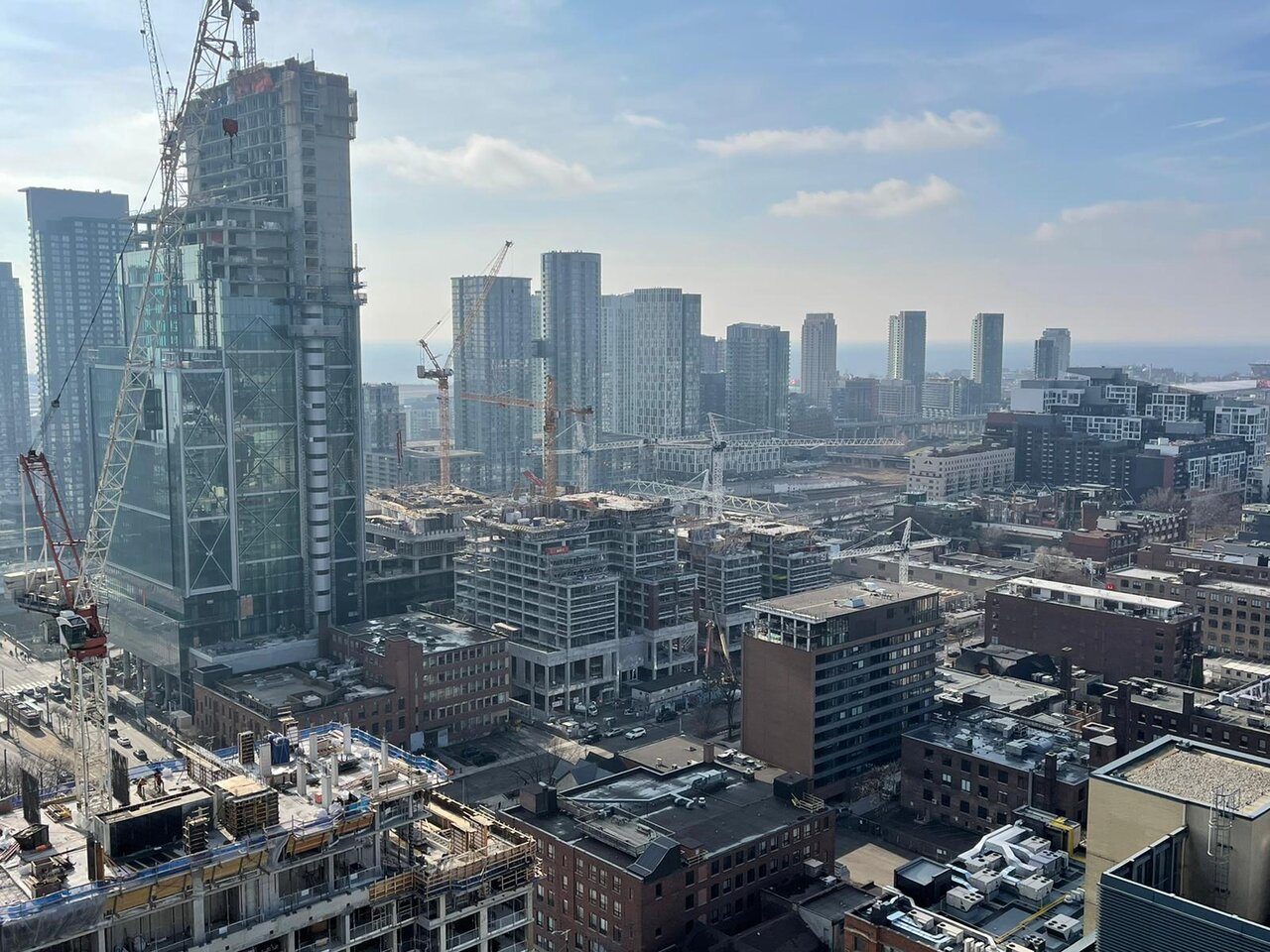 Looking southwest over site of The Well, image by Forum contributor aznih_aznih

The complex’s tallest building, a 36-storey, Hariri Pontarini Architects-designed office tower being built for developers Allied REIT and RioCan REIT, is furthest along in construction, and fast approaching its topping out. The office building stood 28 storeys above the corner of Front and Spadina at the time of our last update in November. Several weeks later, forming has advanced to the 35th floor.

The office tower’s exterior details have also been moving along at an impressive pace, forming a distinctive set of decorative cross-braces which add some definition to the curtainwall glass building envelope. Cladding installation had progressed as far as the 18th floor when we last checked up in November, and has since progressed to the 24th floor. 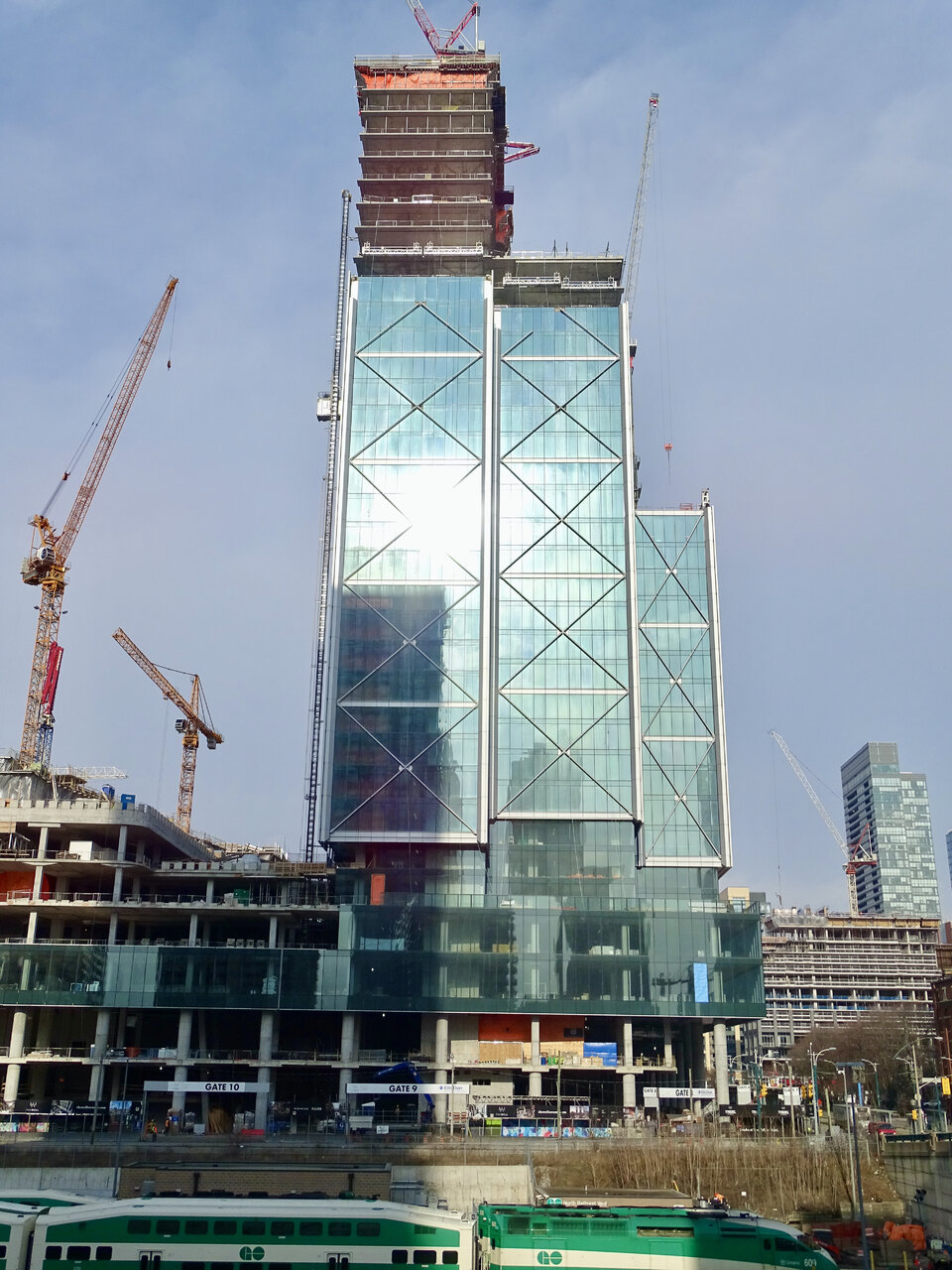 Immediately west of the office tower, a trio of architectsAlliance-designed residential towers are being built along the remainder of the site’s frontage along Front Street. Connected to the office tower via a podium, a 46-storey RioCan Living rental tower is beginning to gain steam in its ascent. With its six-storey base in place, the first tower floors have since been formed, as crews begin the ninth floor. Curtainwall cladding has also begun to enclose the podium levels. 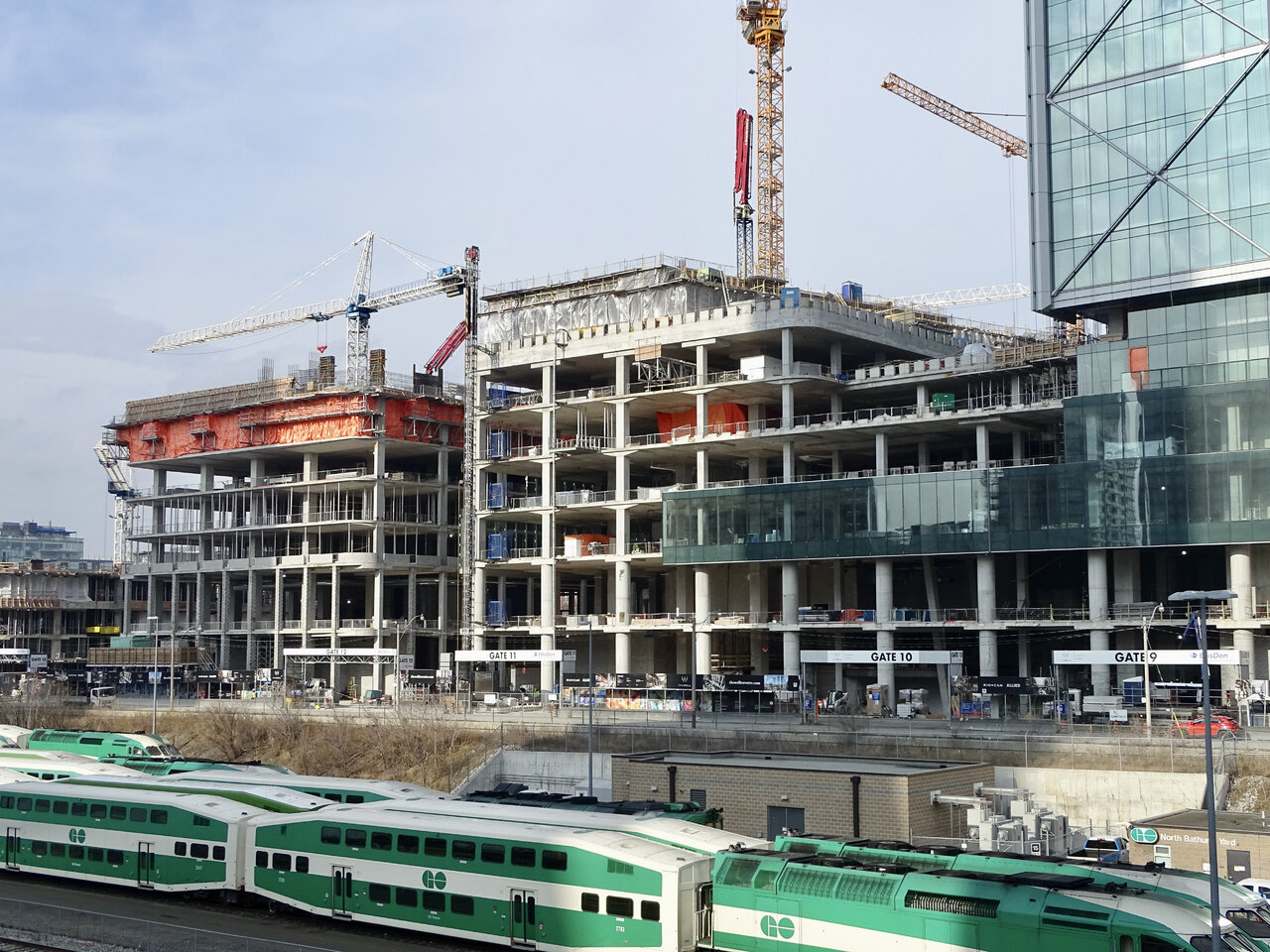 Further west in this trio, a pair of 22 and 38-storey Tridel condo towers are now progressing above grade. The 38-storey condo tower at the centre of the Front Street frontage is having its eighth level formed, while the fifth floor is now being formed for the 22-storey tower at the site’s southwest corner. 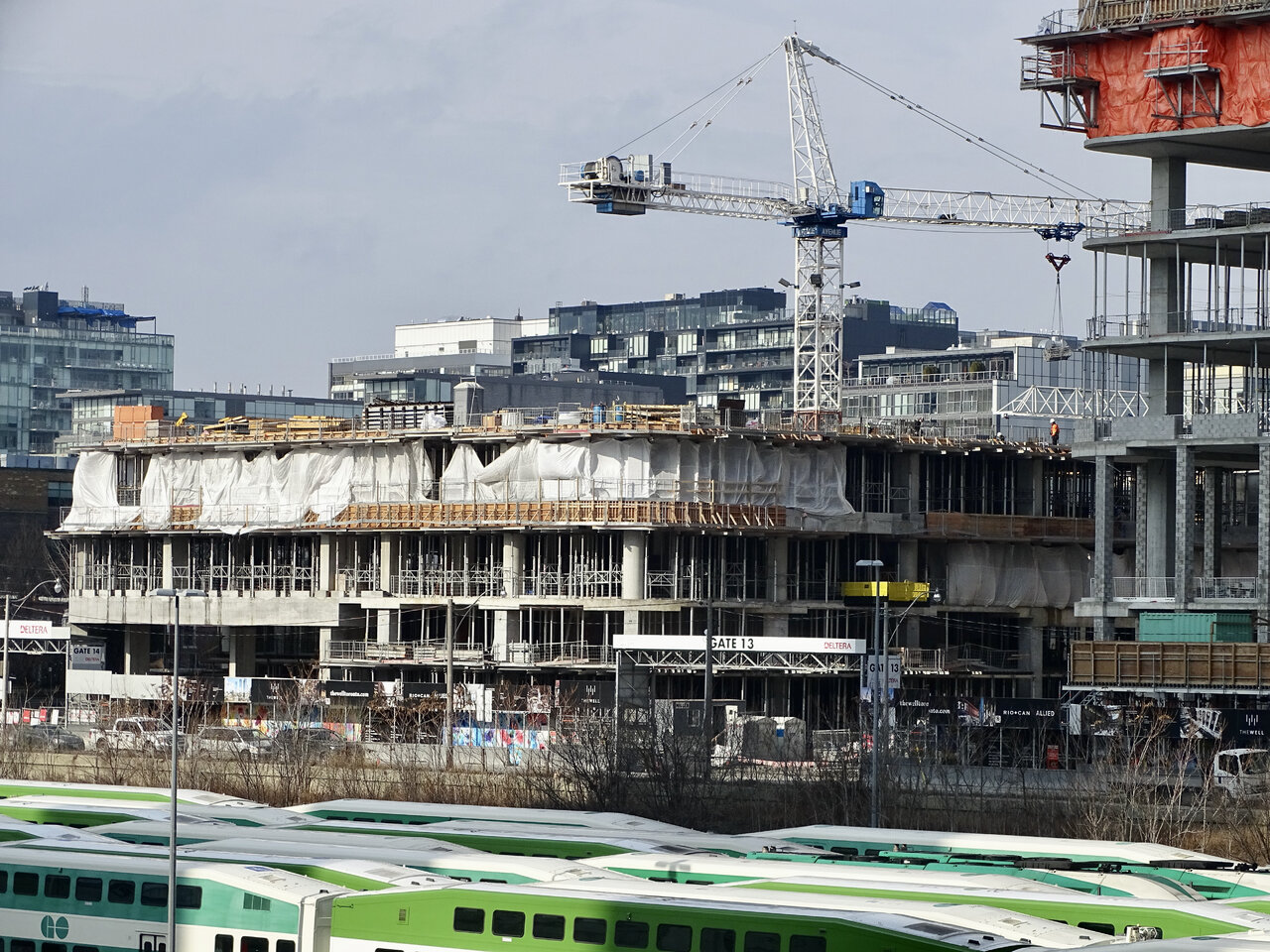 At the north end of the site, three Wallman Architects-designed residential buildings are under construction along Wellington Street West. Two will be RioCan Living 16-storey rentals and the third a 14-storey Tridel condo tower. When we last checked in, the easternmost rental building had advanced to its eighth floor, the central building had reached the fourth floor, and the condo to the west was having its ground floor formed. These buildings have since risen to heights of 12, 9, and 2 storeys above grade. 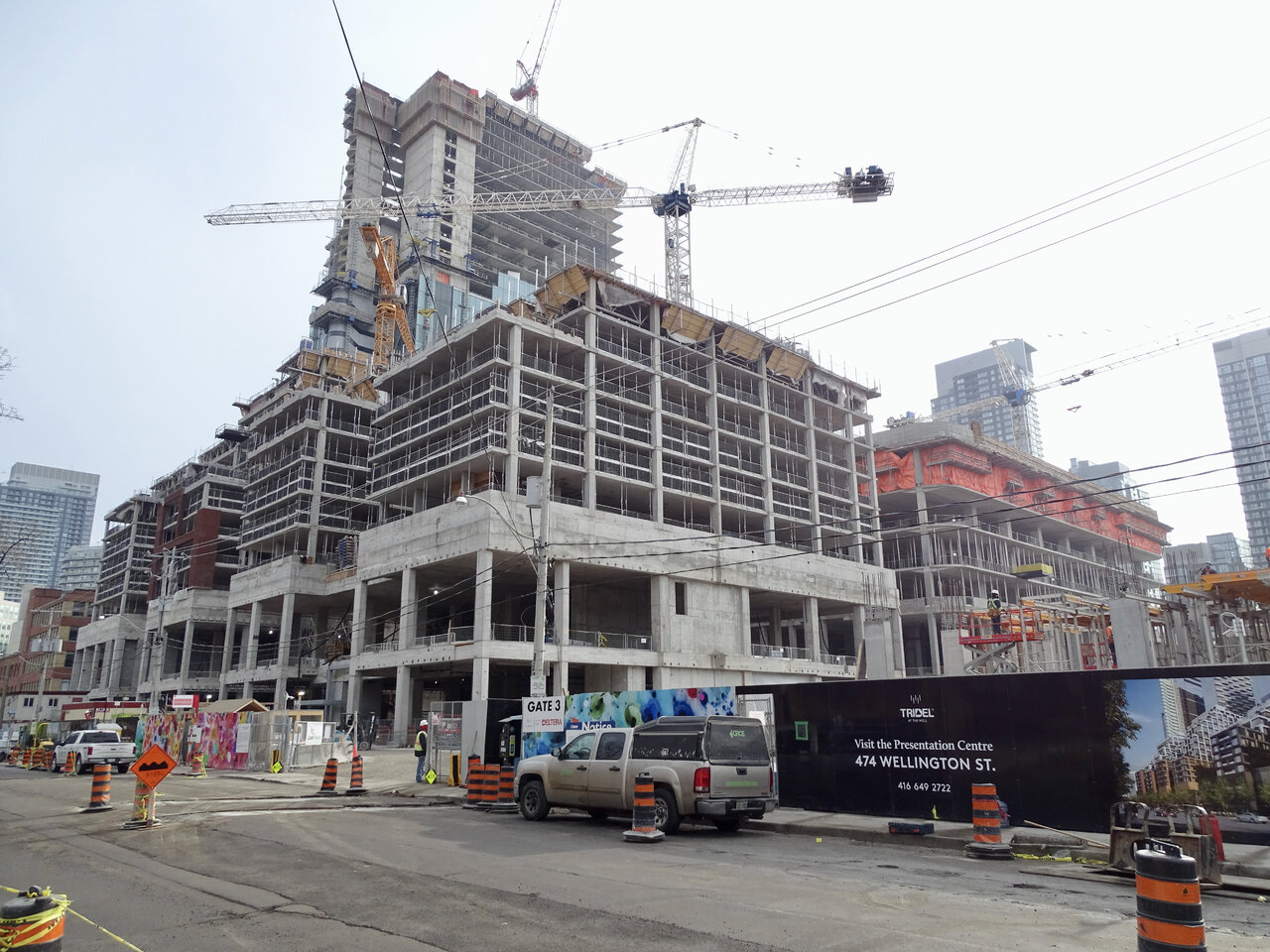 As these buildings rise taller, the first exterior finishes have appeared in the form of red brick panels applied above the base of the northeastern building. 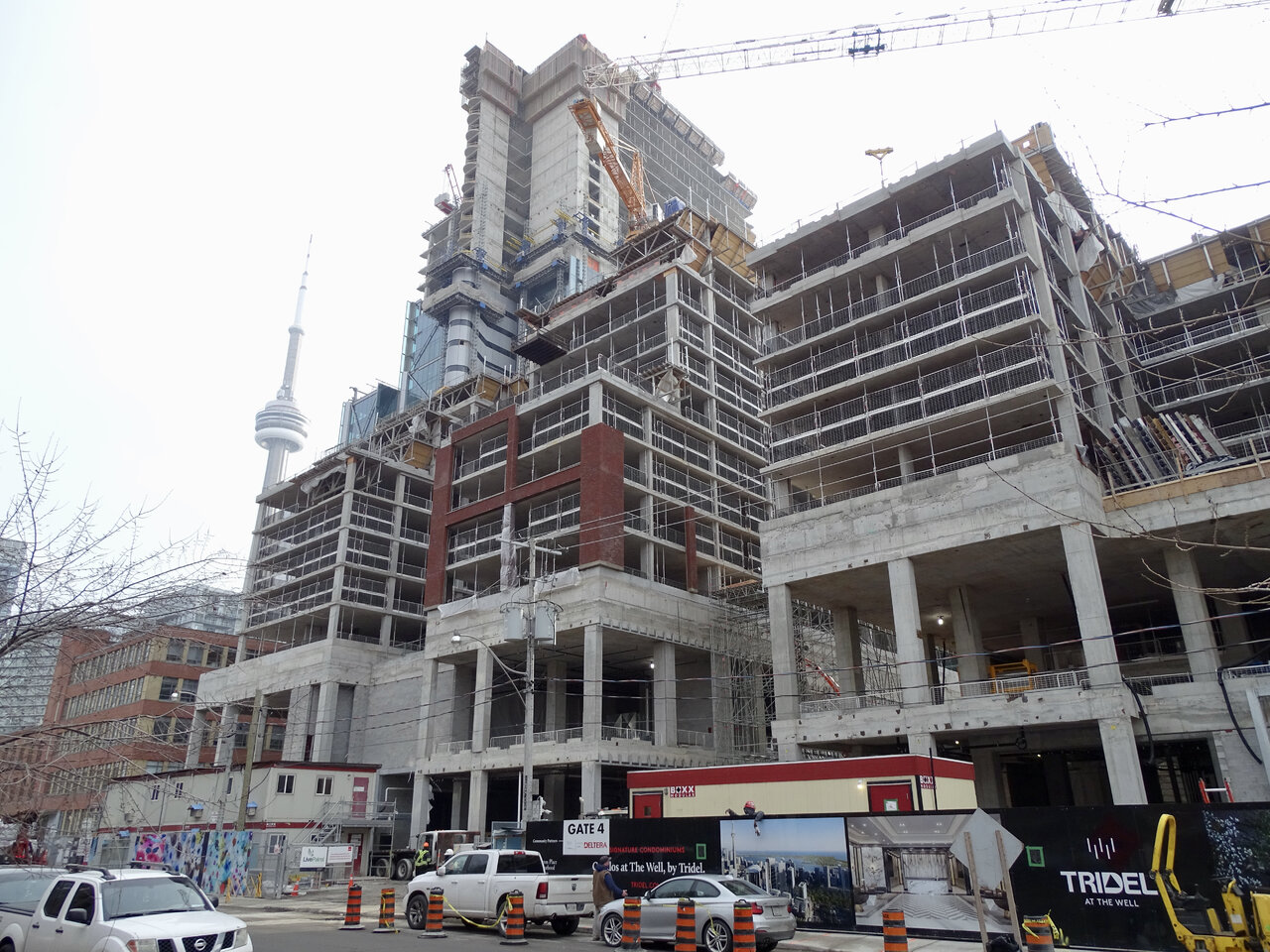 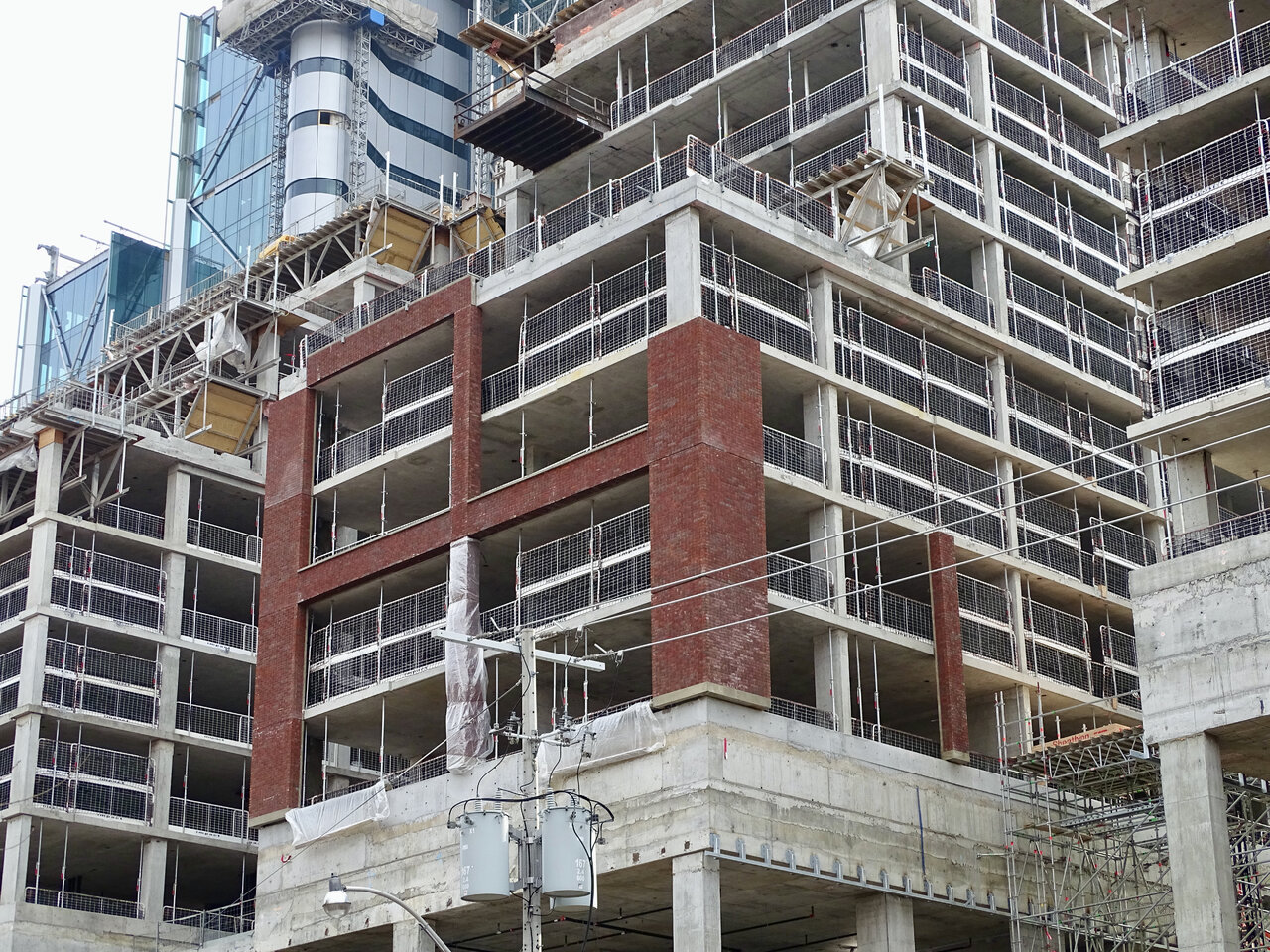 Weaving all of these buildings together, a BDP-designed multi-level retail galleria that carves and curves through the centre of the site, will eventually add restaurants and retail to anchor the block. 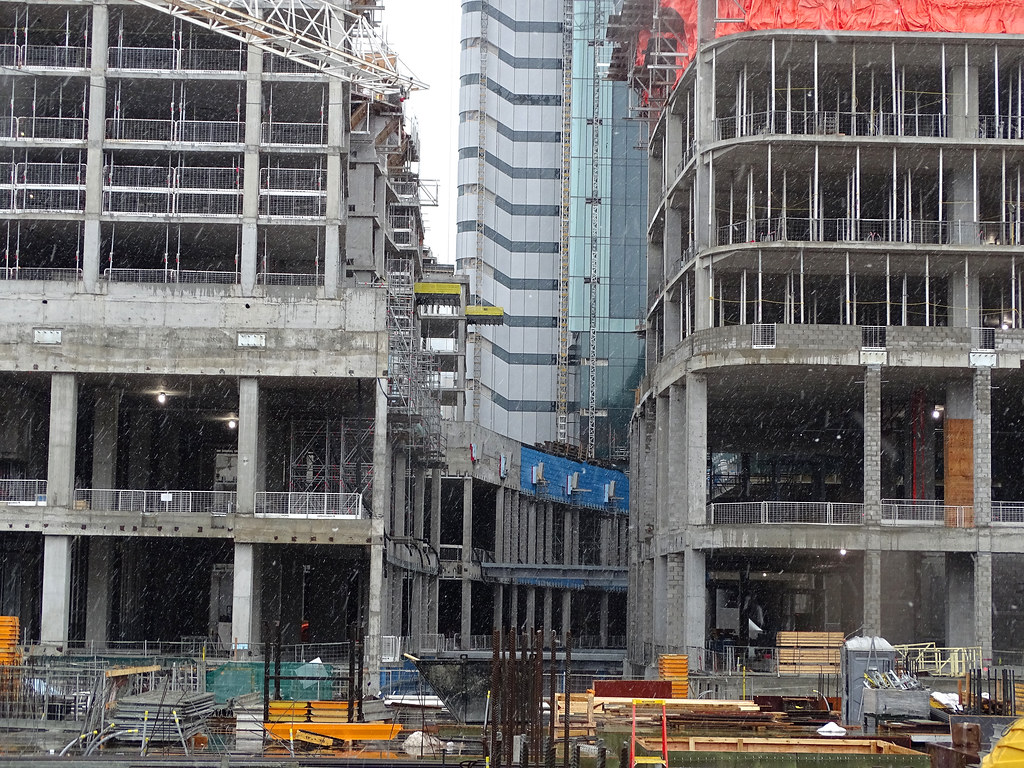 Looking into the retail galleria of The Well on January 3, image by UT Forum contributor drum118