Density and Mixed Use Coming to the Golden Mile

With the new Crosstown LRT opening in less than two years, today, Toronto City Council unanimously passed the Golden Mile Secondary Plan that will guide the redevelopment of many parcels of land along the Crosstown route on Eglinton Avenue East between Victoria Park Road and Birchmount Road in Scarborough. In September, 2020 Choice Properties REIT (CP REIT) submitted a revised Official Plan Amendment (OPA) application for one of the sites in the area, a proposed mixed-use redevelopment of the Golden Mile Shopping Centre at Eglinton and Victoria Park. 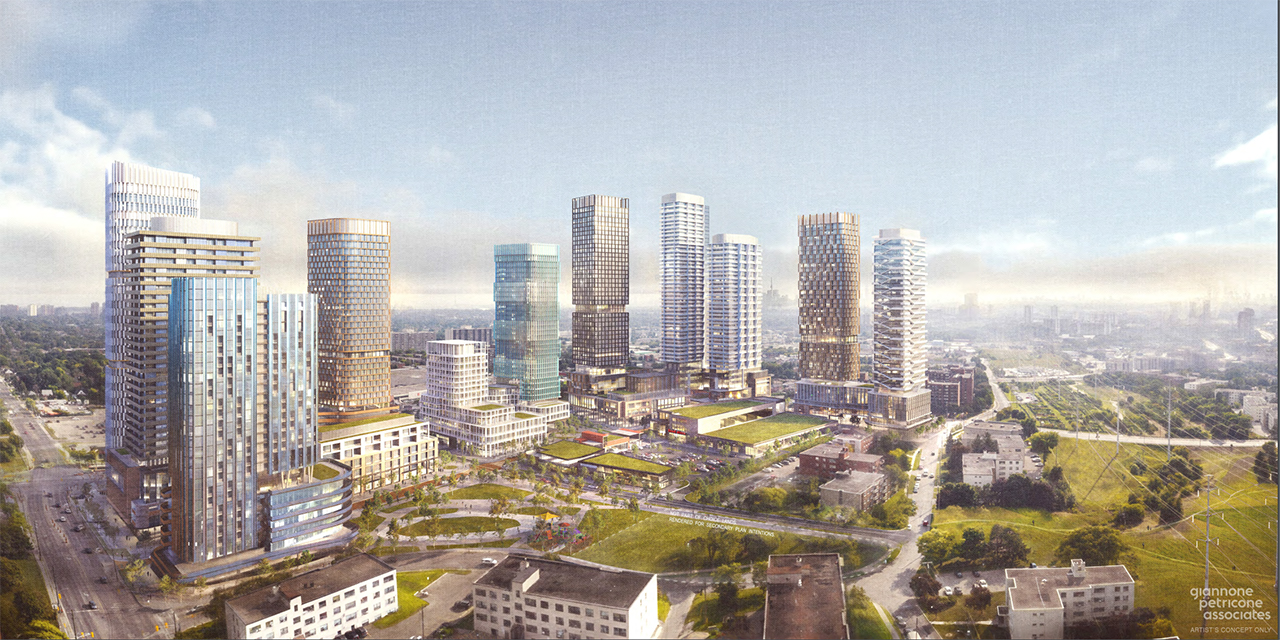 View looking southwest towards the site, image via submission to the City of Toronto

The project, designed by Giannone Petricone Associates, includes ten new residential towers ranging from 25 to 48 storeys tall, and containing 3770 condominium units: 1,885 one-bedroom units, 1,508 two-bedroom units, and 377 three or more bedroom units. Residential uses is to make up 90% of the total gross floor area (GFA); the remaining 10% will be divided between retail (21,072 m²) and office space (11,445 m²).

View looking northeast towards the site, image via submission to the City of Toronto

Most of the planned density will be concentrated along the perimeter of the site, and especially towards the Eglinton frontage and two Crosstown LRT stops. Building heights will then step down towards the northern interior portion of the site. 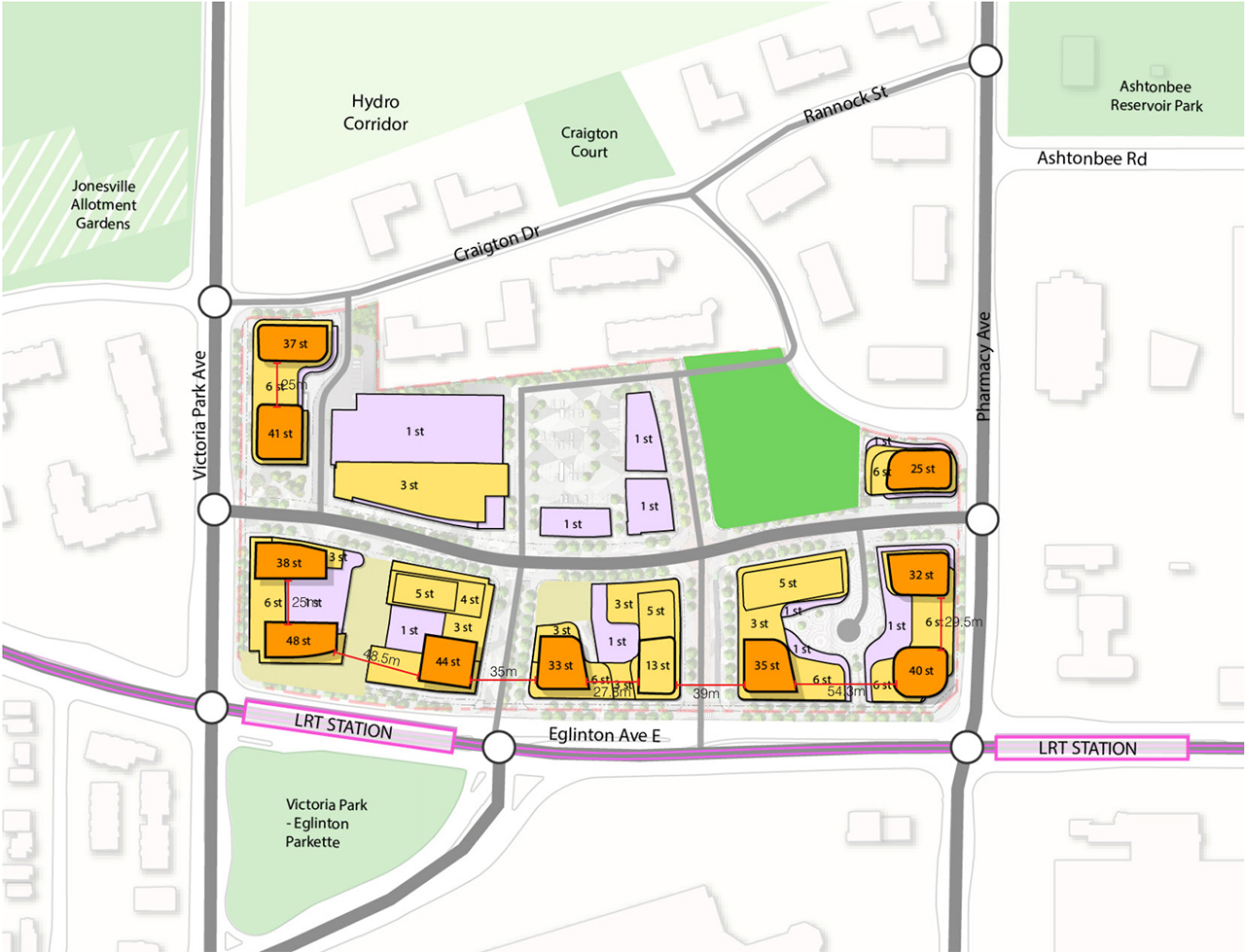 Built form strategy, image via submission to the City of Toronto

The proposal is planned around a new, pedestrian-friendly street grid, which will divide the site into seven developable blocks. Golden Mile Boulevard will form the central spine of this new grid, and will include fine-grained retail uses at grade while also incorporating a major grocery store to replace an existing Loblaws store on the site. To the east of the relocated grocery store and related shops will be a new, 7,170 m² park. 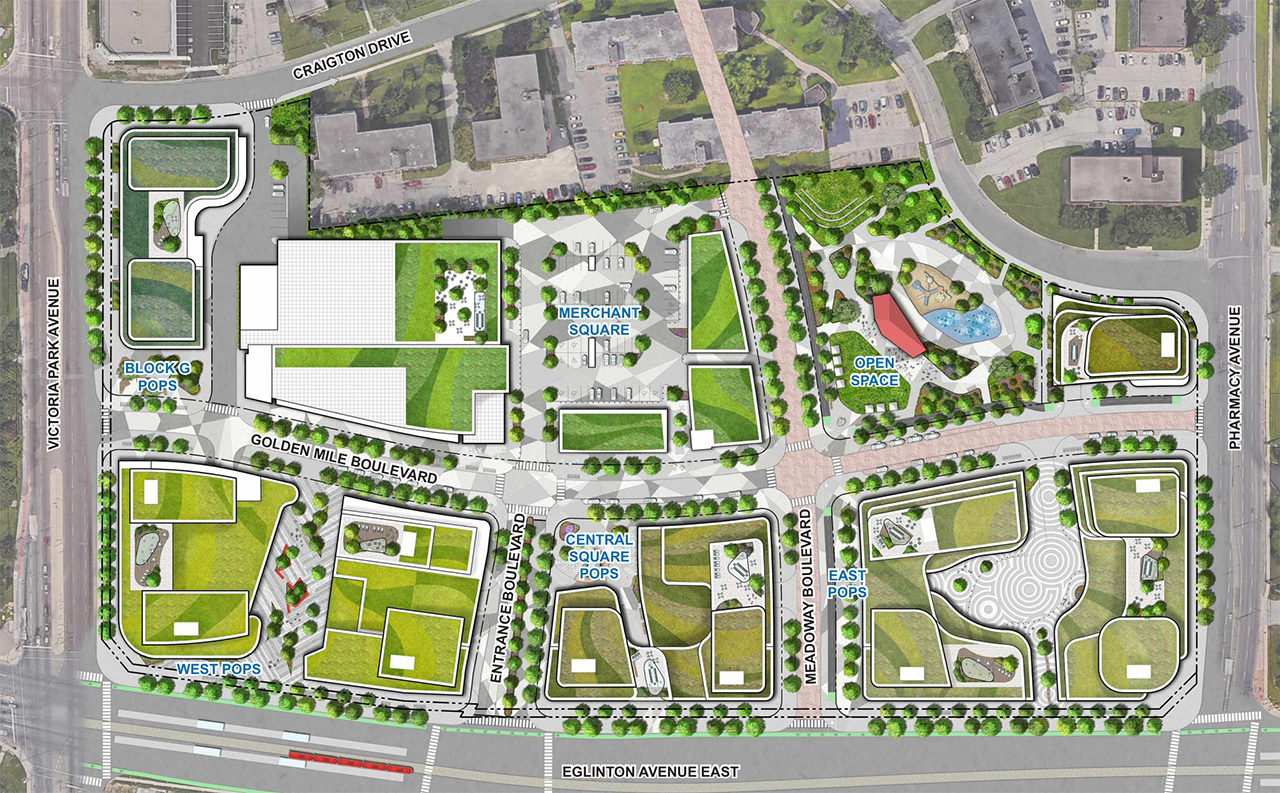 Landscape plan, image via submission to the City of Toronto

Golden Mile Boulevard will be connected to Eglinton Avenue by two additional new north-south streets, currently dubbed Entrance Boulevard and Meadoway Boulevard, both of which will be lined with retail at grade. 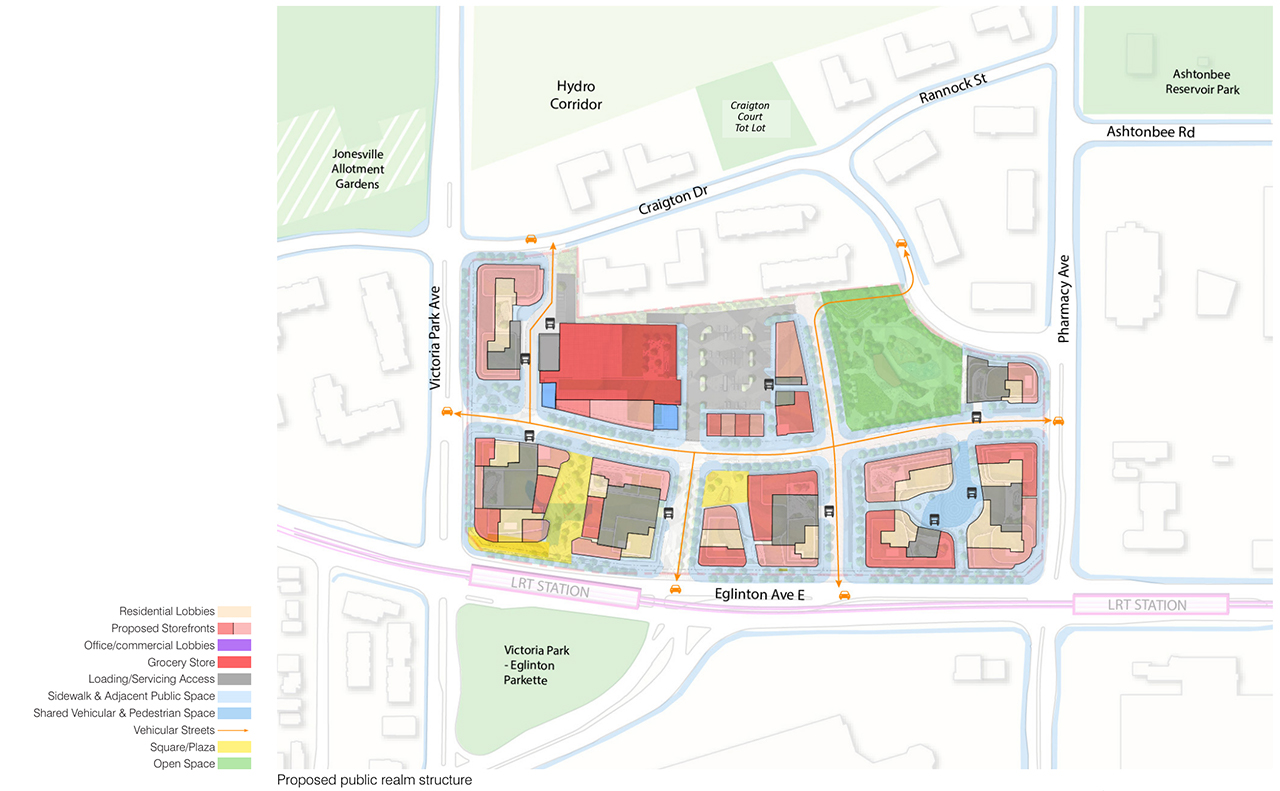 Proposed ground-floor uses, image via submission to the City of Toronto

Each new block will also be penetrated by mid-block pedestrian connections, which will link up several POPS (Privately Owned Publicly accessible Spaces) scattered throughout the site. 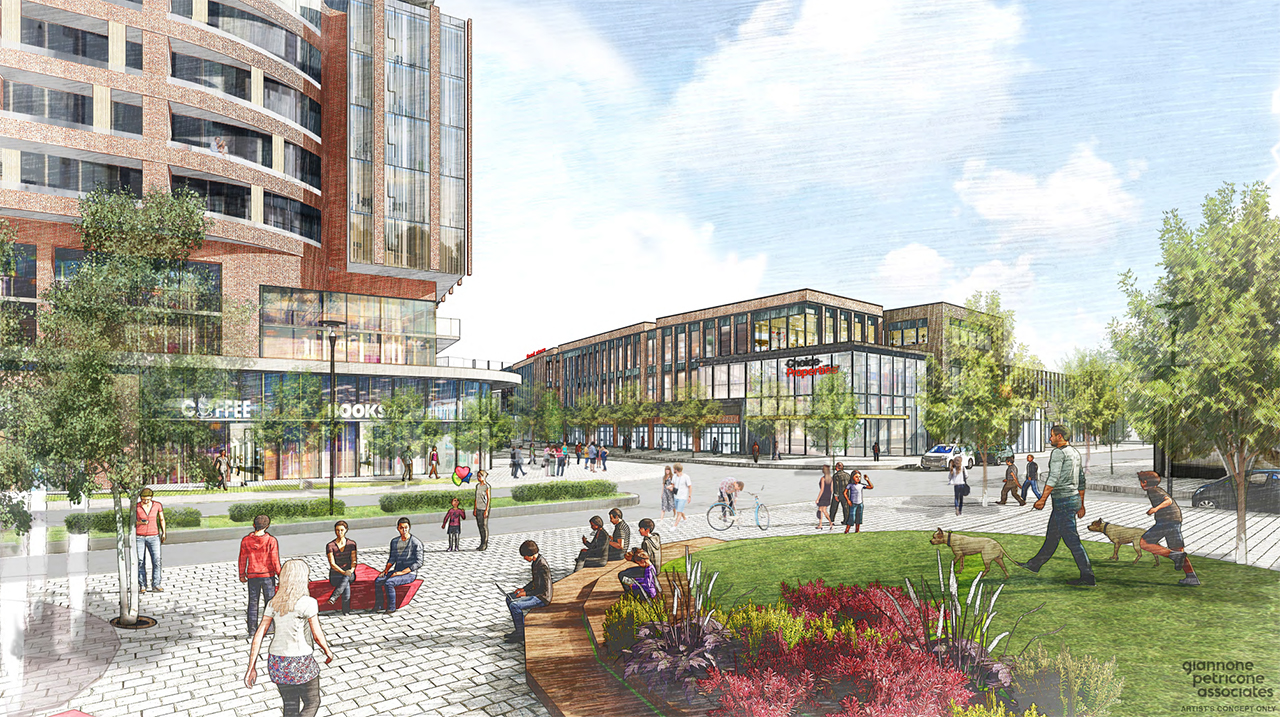 View from &quot;Central Square&quot; POPS at Entrance Boulevard and Golden Mile Boulevard, image via submission to the City of Toronto 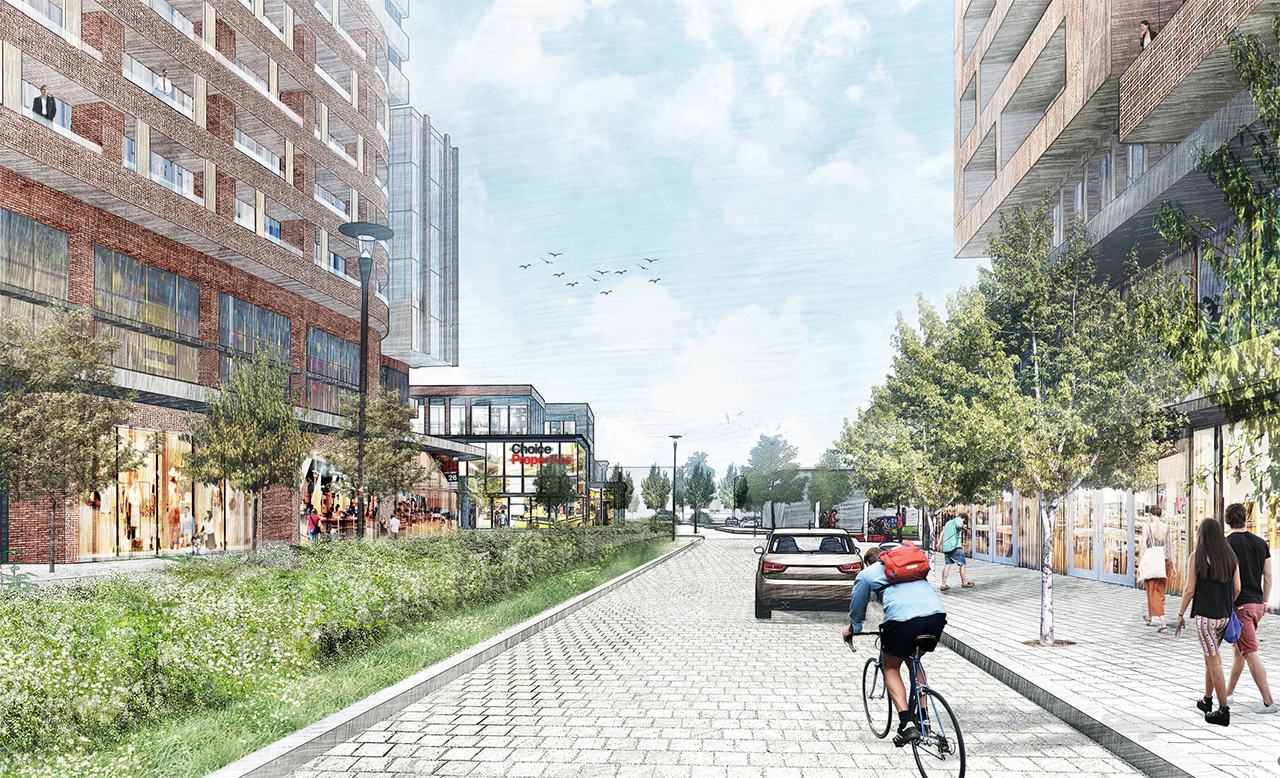 View along Entrance Boulevard from Eglinton Avenue, image via submission to the City of Toronto

Several plans in the area respond to the forthcoming Crosstown LRT by proposing drastically increased densities for an area of Toronto currently dominated by big box stores and surface parking lots. The newly passed Golden Mile Secondary Plan (GMSP) was created to manage the growth here.

Although the proposed density for the Golden Mile Shopping Centre site goes far beyond current zoning allowances, CP REIT argue that their scheme aligns with the vision laid out in the 2020 Provincial Policy Statement and the 2019 Growth Plan for the Greater Golden Horseshoe, as well as the GMSP, with which they have been involved since 2016.

This most recent OPA submission is a formal revision to the original application from December, 2016 and follows another formal revision from November, 2019. While the plan closely resembles the original 2016 submission, there have been some significant changes in the intervening years. The number of towers has increased from nine to ten, with heights increasing across the board as well; originally 16 to 39 storeys, they now seek 25 to 48 storeys. The park has also been moved north of Golden Mile Boulevard to put greater density along Eglinton and closer to transit, while allowing for the possibility of the park’s expansion as part of further redevelopment north of the site. 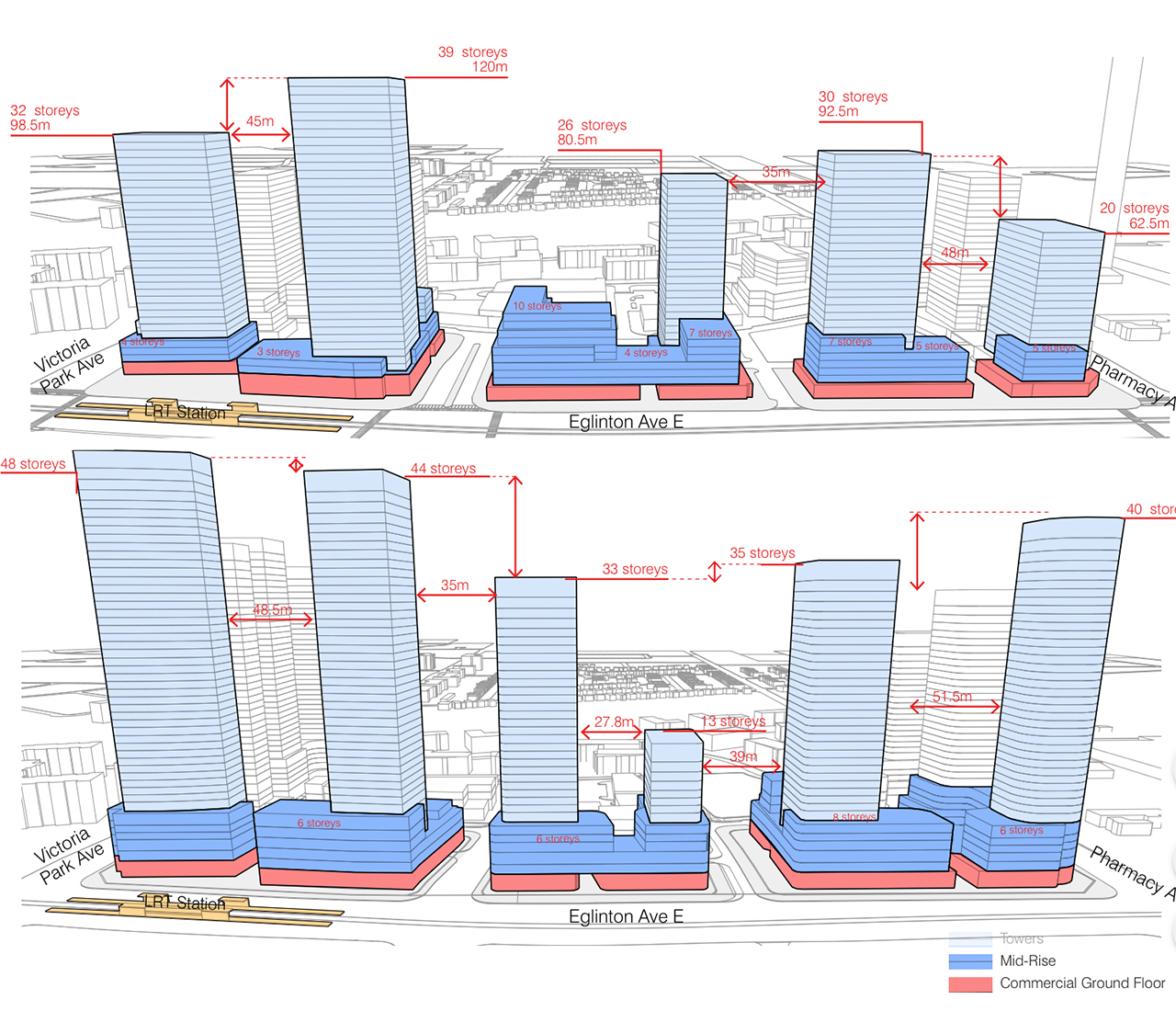 Massing comparison between 2016 (top) and 2020 plan (bottom), image via submission to the City of Toronto 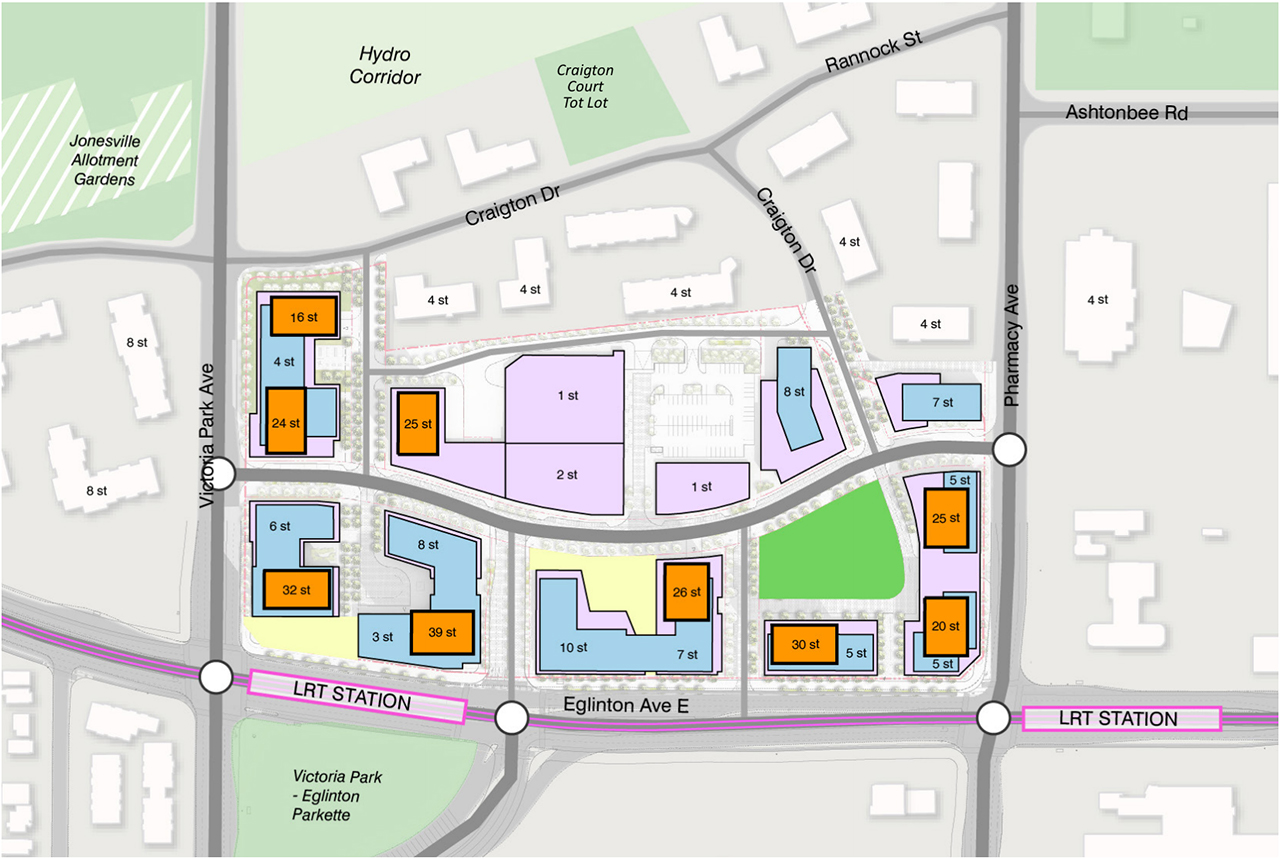 Original 2016 built form strategy, with lower overall density and alternative park location, image via submission to the City of Toronto

Construction will be conducted in phases, beginning with the southwest corner at Victoria Park and Eglinton in phase 1, and proceeding clockwise around the site in four subsequent phases. The existing supermarket will be relocated in phase 2, and the park will be built up during phase 3. 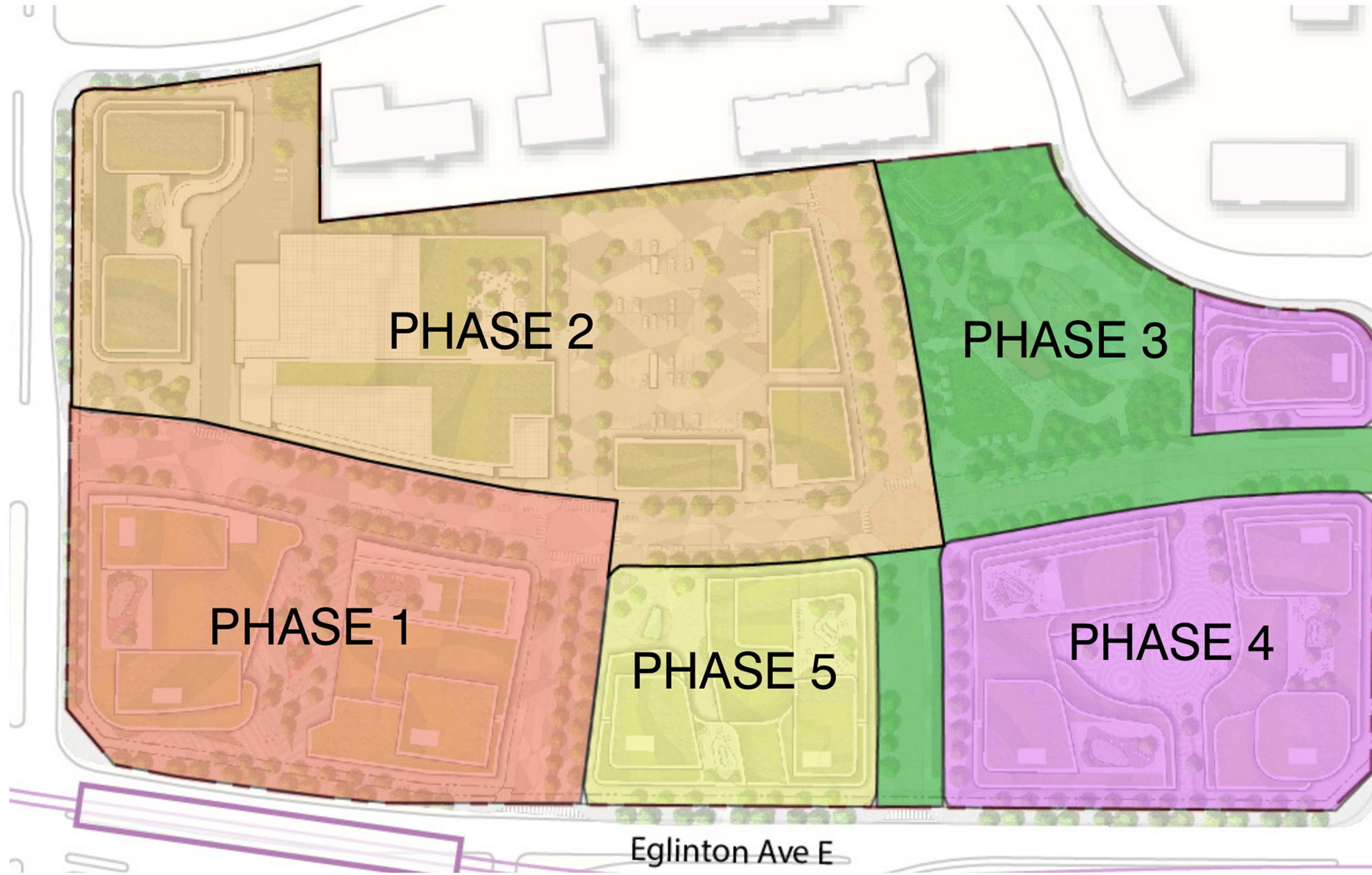 Phasing plan, image via submission to the City of Toronto