A Zoning By-Law Amendment application has been submitted to the City of Toronto, to permit an infill development consisting of two buildings on the site at 4340 Bloor Street West in Etobicoke’s Markland Wood neighbourhood. Proposed by Hazelview Investments Inc and designed by gh3, the 308-unit project adds to the existing 86 unit building currently onsite. 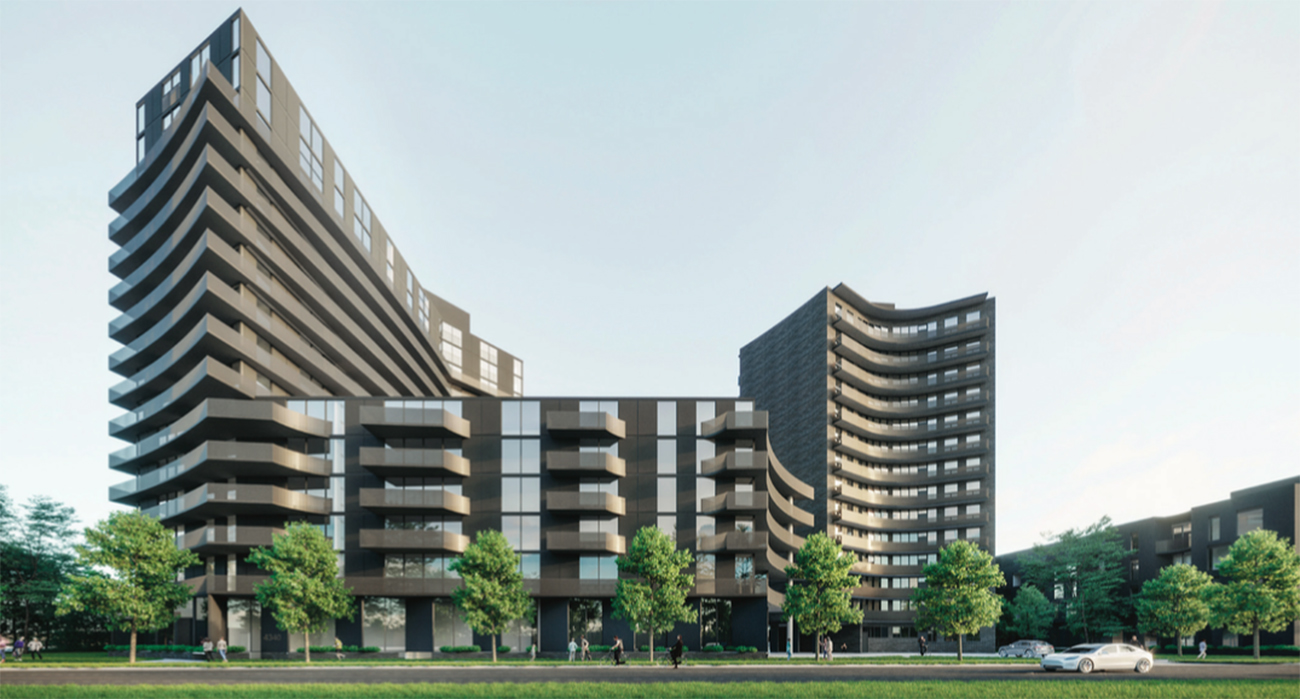 Bounded by Bloor Street West to the south, MIll Road to the East, Millwood Junior School to the north, and Millwood Park to the west, the project intends to unlock the site’s full potential with the addition of a 16-storey tower on the site’s west frontage, and an additional four-storey building on the east-frontage. The subject site spans some 10,060 m² and is currently occupied by a single 15-storey ‘Tower-in-the-Park’ style rental apartment building situated in the middle of the site, surrounded by a combination of landscaped and paved open space.

On the west side of the site, the proposed 16-storey tower (17, 435 m²) will rise 56.5 m, with two six-storey base elements that extend from the north and south to create a C shaped building footprint. The structure has been designed to animate the site’s south, west and north frontages, creating ground floor walk-up entrances for residential units at grade, and a semi-contained internal courtyard area. A total 243 units will be contained within.

Massing model of west building, image via submission to City of Toronto

The proposed four-storey east building (4,588 m²) is situated along the site’s east frontage, representing a downward transition in height from the proposed 16-storey west building and the existing 15-storey central building, to be sensitive to the adjacent low-rise neighbourhoods east and north of the site. The building’s footprint curves around on the north and south corners to create two small ‘wings’ that face back into the site. In total, the building will contain 65 units, with walk-up units on the lower floors intended to create an animated and neighbourhood-friendly streetscape at grade.

Massing model of east building, image via submission to City of Toronto

A total 1,448 m² of indoor and outdoor amenity spaces are provided across both buildings at grade, and on the seventh floor of the proposed west building. A full landscape plan has additionally been prepared by MEP Design Landscape Architects, which has been carefully designed to complement the relationship between the site’s open space and its build form.

A two-level underground garage is proposed as part of the development containing spaces for 418 cars, 86 of the spaces for residents in the existing building who are currently served by a surface parking lot on the area of the future west building. Spaces for 210 bicycles will be located in areas on the ground floor of each building.