There’s no development proposal on UrbanToronto that attracts more attention, whenever there are updates, than Mirvish+Gehry Toronto does. There’s little wonder why: the buildings are designed by Frank Gehry, who grew up here and who designed the latest expansion of the Art Gallery of Ontario, but whose greatest works, including some of the most celebrated buildings in the world from over the last decades, are elsewhere, like the city-redefining Guggenheim Bilbao, and the Walt Disney Concert Hall in Gehry’s adopted hometown of Los Angeles. Ever since these towers were first announced, they have promised to be Gehry’s tallest, and as Gehry approaches 92 years old on February 28, they may be among his last projects. Everyone seems to want to see these towering structures rise, and they want them to be fittingly monumental—for the architect, and his place where he grew up—but some impatience is showing. 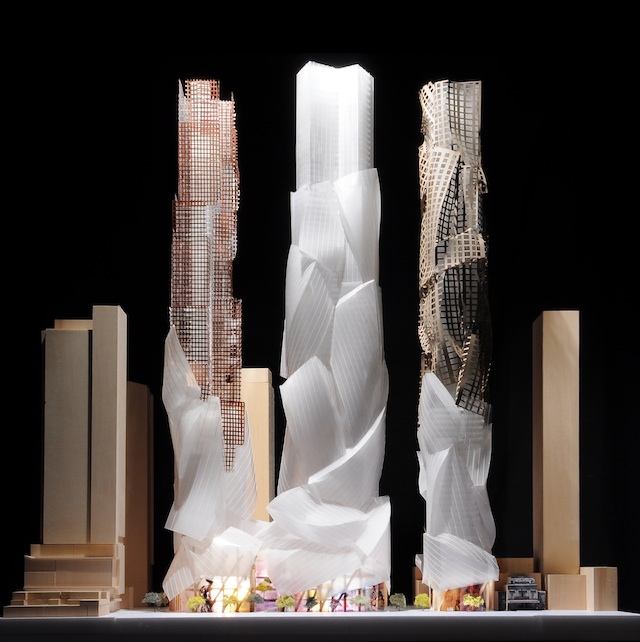 Looking north to the June, 2013 model for Mirvish+Gehry Toronto, designed by Gehry Partners for Projectcore

What all the wishes for these buildings continue to run into, is reality. The average building going up in Toronto takes many years from concept to turning over the keys, but these above average ones are taking years longer than average—what seems to be forever to some observers—and long enough that some who comment in UrbanToronto’s thread for the project, and whom one would have normally characterized as passionate, might now be better termed as ‘cynical’.

Whether or not impatient members of the public believe that the towers will ever rise, however, the reality is that in behind the scenes, planning work is continuing on the massive project, responding to shifting the economic realities that determine whether the development partners on the project, Great Gulf, Dream Unlimited, and Westdale Properties, will be able to sell the 2,087 suites at the price they will need to create the monumental buildings people are expecting. 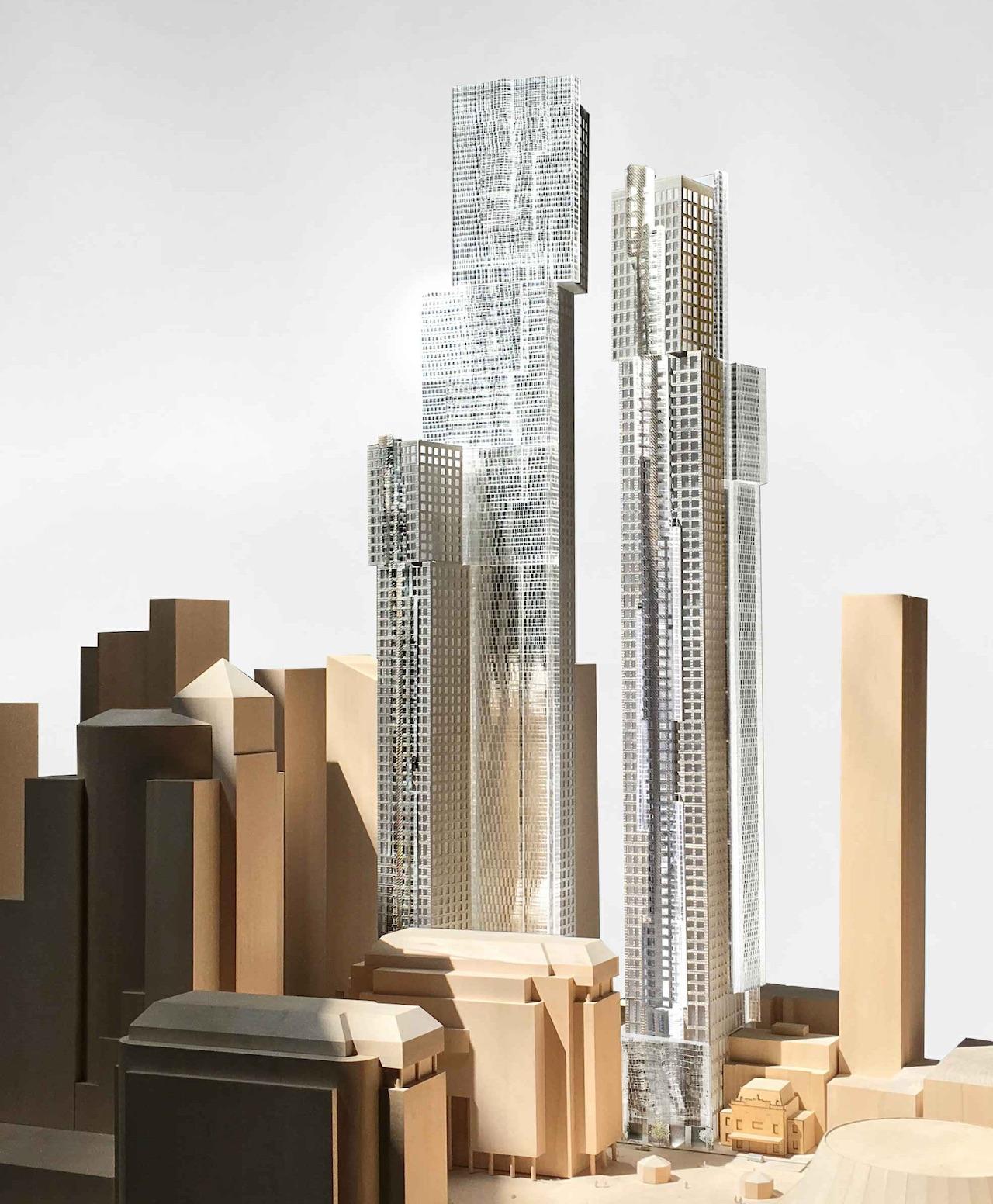 Looking northwest to the December, 2018 model for Mirvish+Gehry Toronto, designed by Gehry Partners for Projectcore

To that end, there have been a number of wholesale changes to the design over the years. What started in the Fall of 2012 as a proposal for three towers became a two-tower proposal in May, 2014, saving the Princess of Wales Theatre from that point on. As of October, 2018 the original developer Projectcore was seeking Site Plan Approval and gearing up to market the buildings, but following a sale to Great Gulf, Dream, and Westdale soon after, the buildings were resubmitted to the City in December, 2018 for zoning density and height increases that would have made both buildings ‘supertalls’ (each over 300 metres tall) and added a hotel to the base of the west tower. 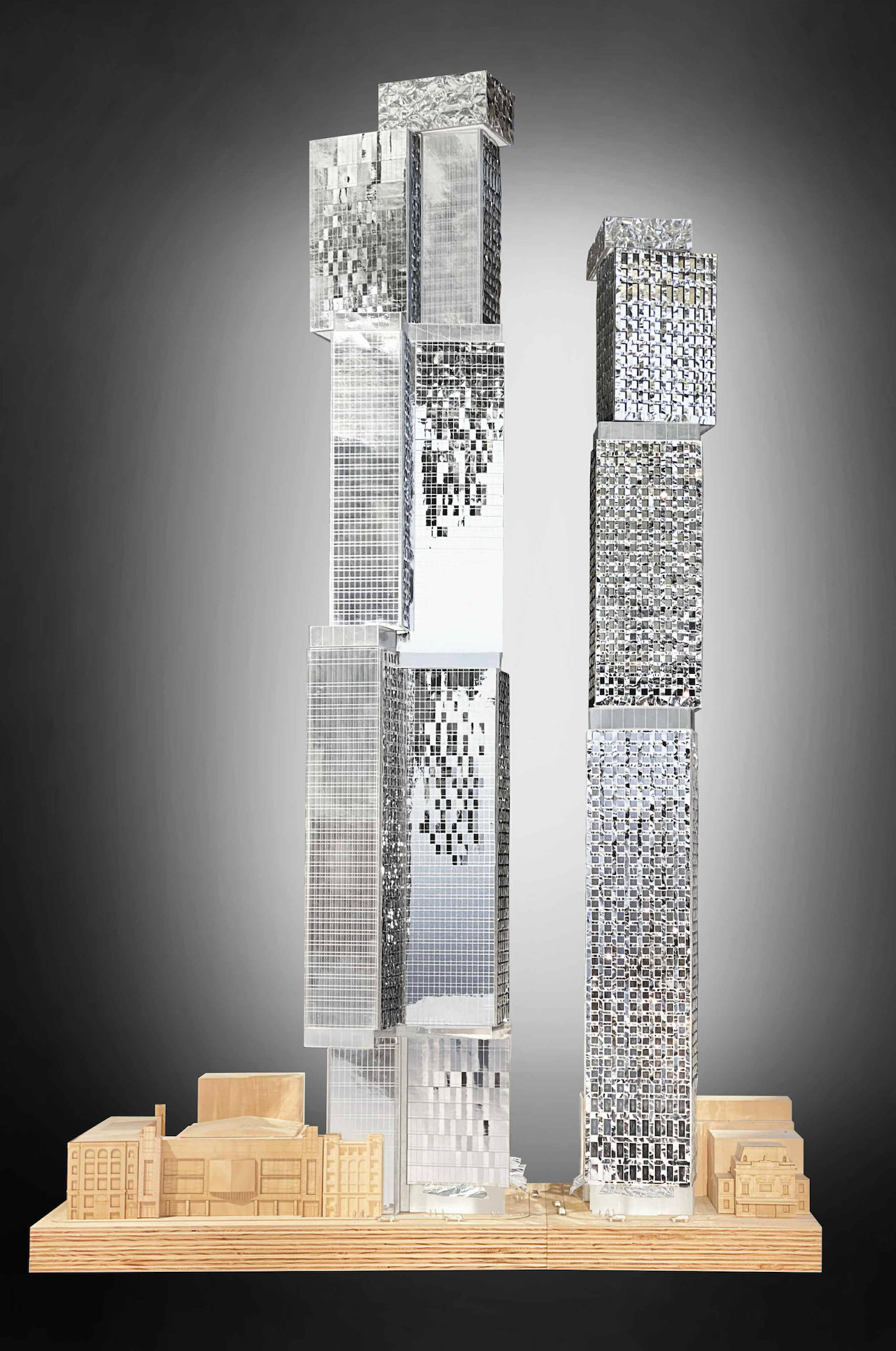 Things have changed yet again, and we can only speculate as to why at this point, but one can make some educated guesses.

First, regarding the height: the towers received zoning approval for a 92-storey West Tower and an 82-storey East Tower, at 305.09 metres tall and 274.92 metres tall, respectively. The taller tower was cut off from going higher so as to not shadow on Queen Street through its Heritage Conservation District area to the north. The December, 2018 version asked for one storey less each, but a fair bit higher: 328.86 metres for the West Tower and 301.74 metres for the East Tower. Each floor in the towers would have been higher: high ceilings make luxury condo suites easier to sell. The City did not grant the height extensions however, so in this latest version we now have fewer floors, 82 and 72, and heights of 308.0 metres and 266.5 metres. The West Tower would still be a supertall.

Whereas shadow concerns likely quashed the height extension of the West Tower, what could explain the drop in the height of the East Tower may simply be a slight scaling back of the project to bring down costs and make it easier to sell out. Certainly there are other indications that the newest version will be less expensive to build than the previous one: the towers have each become more rectilinear—90° angles now occur more frequently—and the faces of the tower sections are flatter. 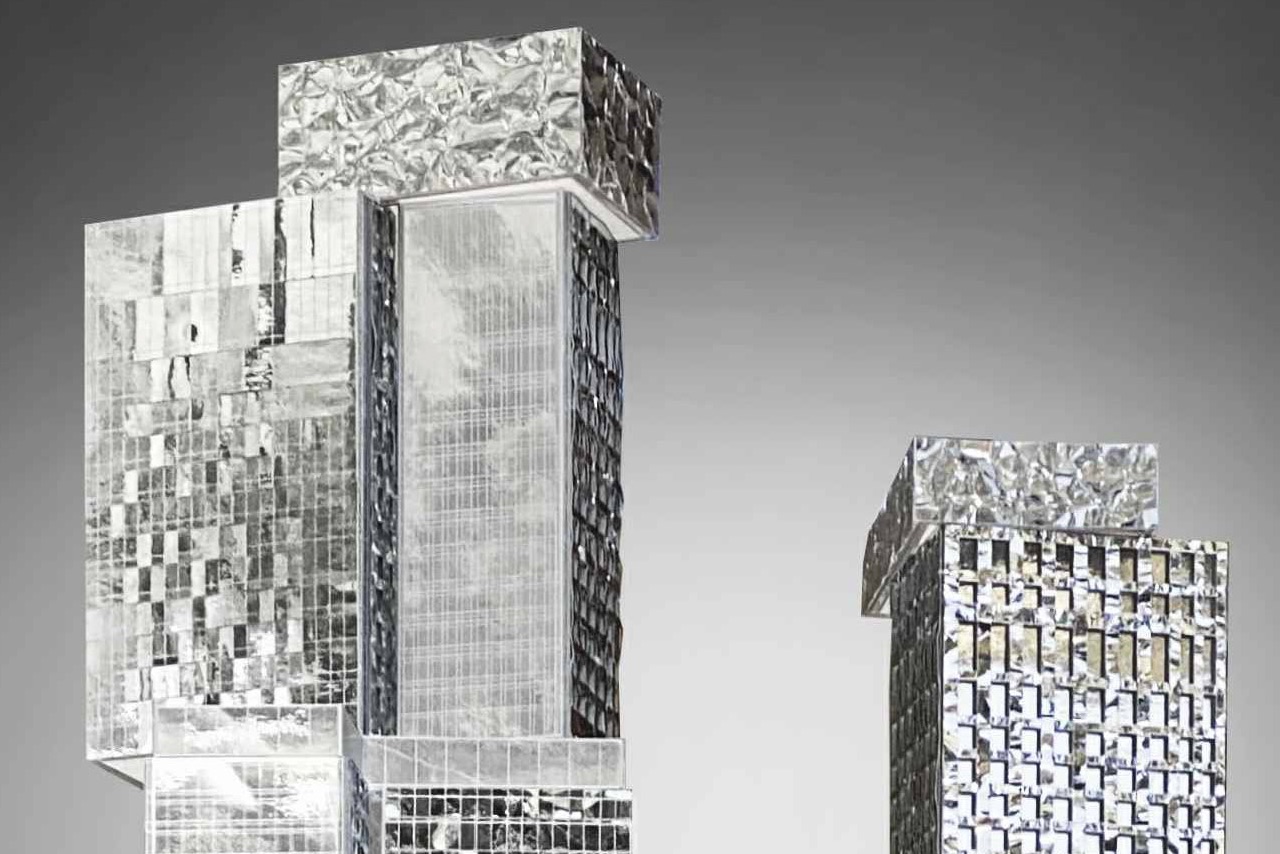 Looking north to the tops of the towers of Mirvish+Gehry Toronto, designed by Gehry Partners for Great Gulf, Dream, and Westdale Propteries

While the current resubmission seeks zoning approval for the new version and not site plan approval (where exterior plans have to be much more detailed), the images that accompany the architectural plans still show variation on the exterior despite it being rather flat compared to most Gehry-designed buildings.

In this series of detail images taken from the overall image above, one can see that there are a variety of surface treatments being applied. Starting at the top, the mechanical penthouses, shifted from the uppermost tower sections, appear to have a crinkled exterior, like once-scrunched aluminum foil subsequently flattened again when applied over a frame. As the documents do not describe the material, we can only guess whether it will be a crimped, shiny metal application. If so, it may catch the light in spectacular ways. 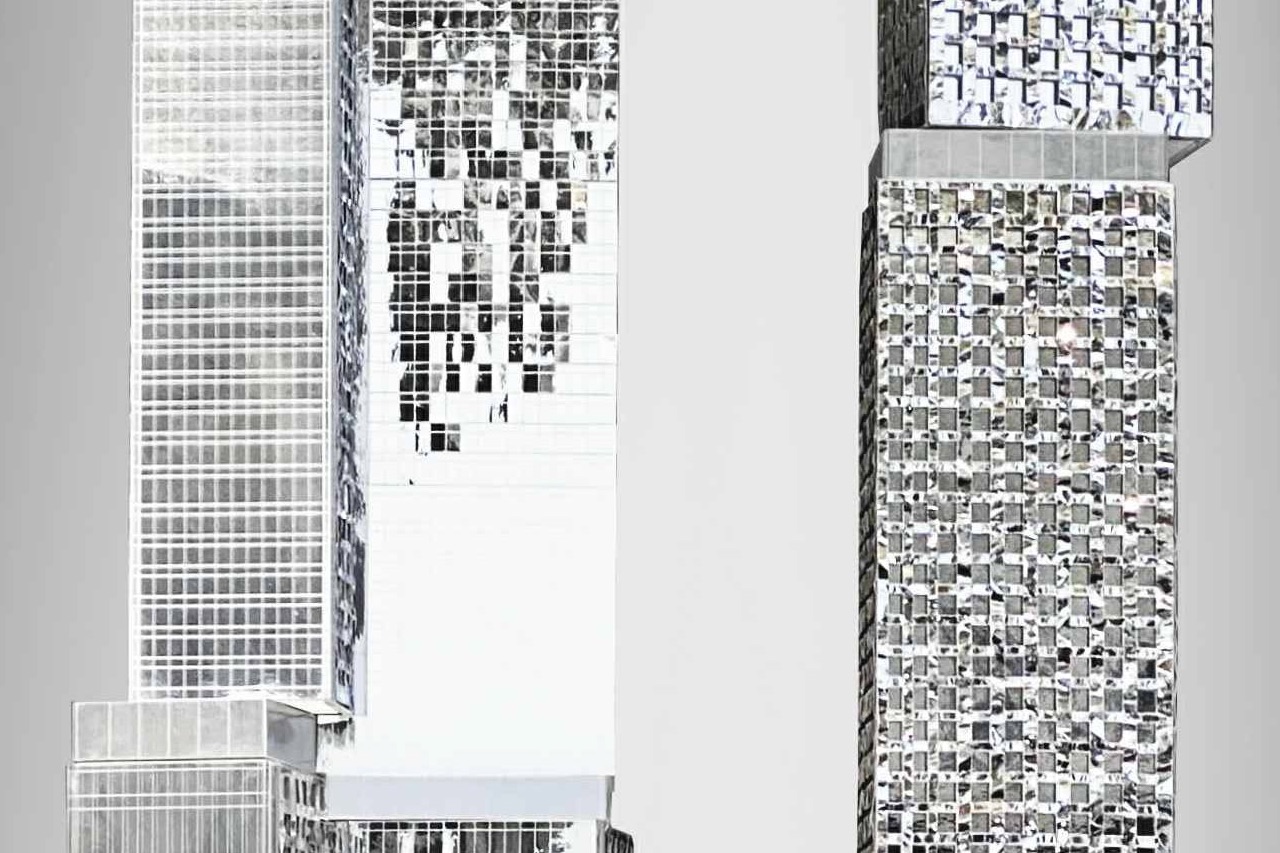 Looking north to the upper levels of the towers of Mirvish+Gehry Toronto, designed by Gehry Partners for Great Gulf, Dream, and Westdale Propteries

In the two mid-tower detail images above and below, while noting that there are no balconies in the plan, one can make out three different surface treatments. To the left is the plainest; a glass curtain wall, more typically found on office towers. On the right volume of the West Tower, the glass curtain wall has an effect applied to it that appears like an abstracted shower of water that starts at the top of each shift of the volumes before petering out. One could take this as differing coatings being applied to the windows that change reflectance, and seems to replace the 3D waterfall effect achieved through shifted windows seen in the December, 2018 image higher above. The East Tower, boasts yet another cladding treatment: its windows are punched through a frame that has a mottled, potentially variably light-reflecting surface. Again, we do not know yet what materials are proposed, but it’s noting that’s been applied just quite this way yet, not in this city in any case. 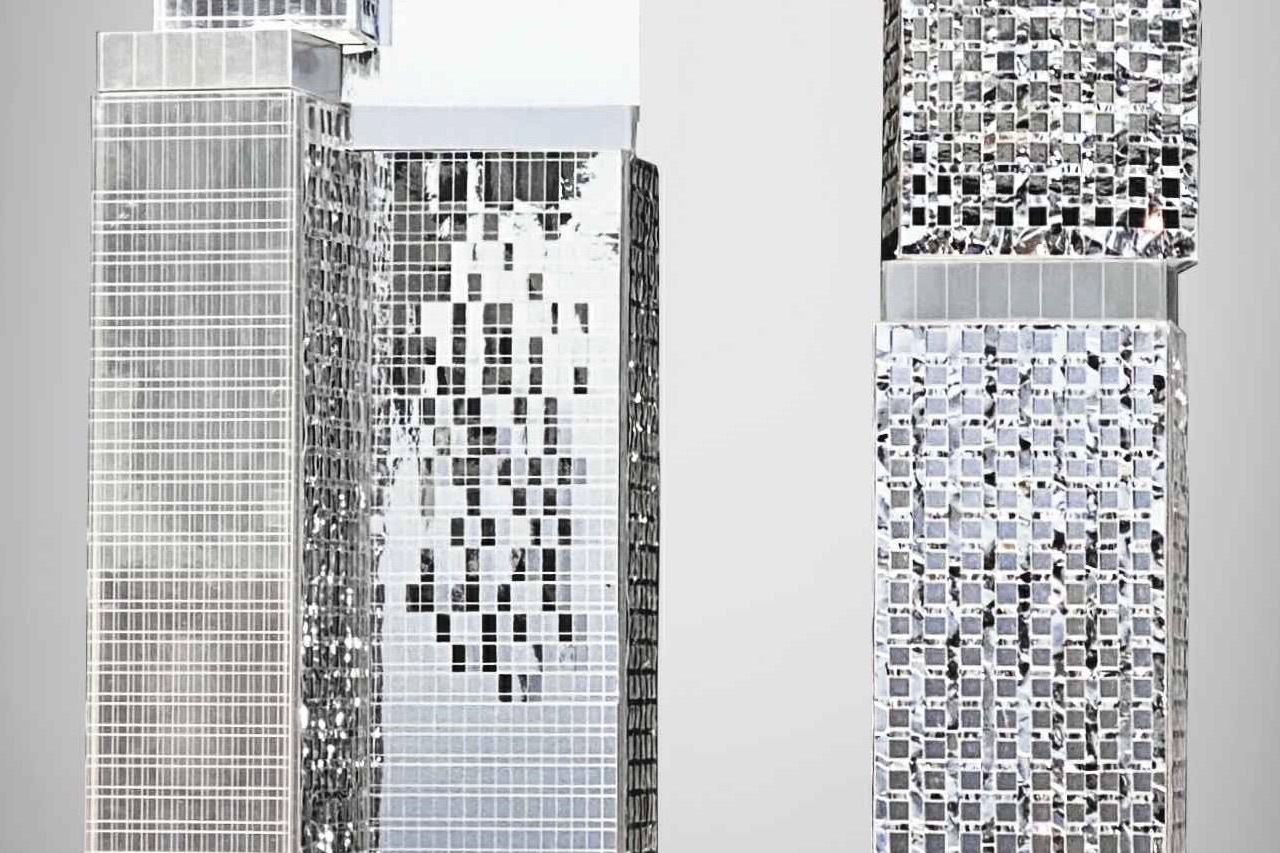 Looking north to the lower levels of the towers of Mirvish+Gehry Toronto, designed by Gehry Partners for Great Gulf, Dream, and Westdale Propteries

The biggest changes have been made at podium level: the floor layouts here are considerably simpler, and a full viewing of the model images (you will find several more images covering other angles and sides of the buildings in our linked database file for the project) will show that these levels are much boxier than before. This approach seems to reflect a simplification for what will be found inside, too: the West Tower has lost a hotel on floors 10 through 20, and goes with office space up to the first volume shift instead. The East Tower’s podium floors are now simply for new OCAD University space. Retail is still included at ground level of both towers, although there is very little of it in the East Tower. 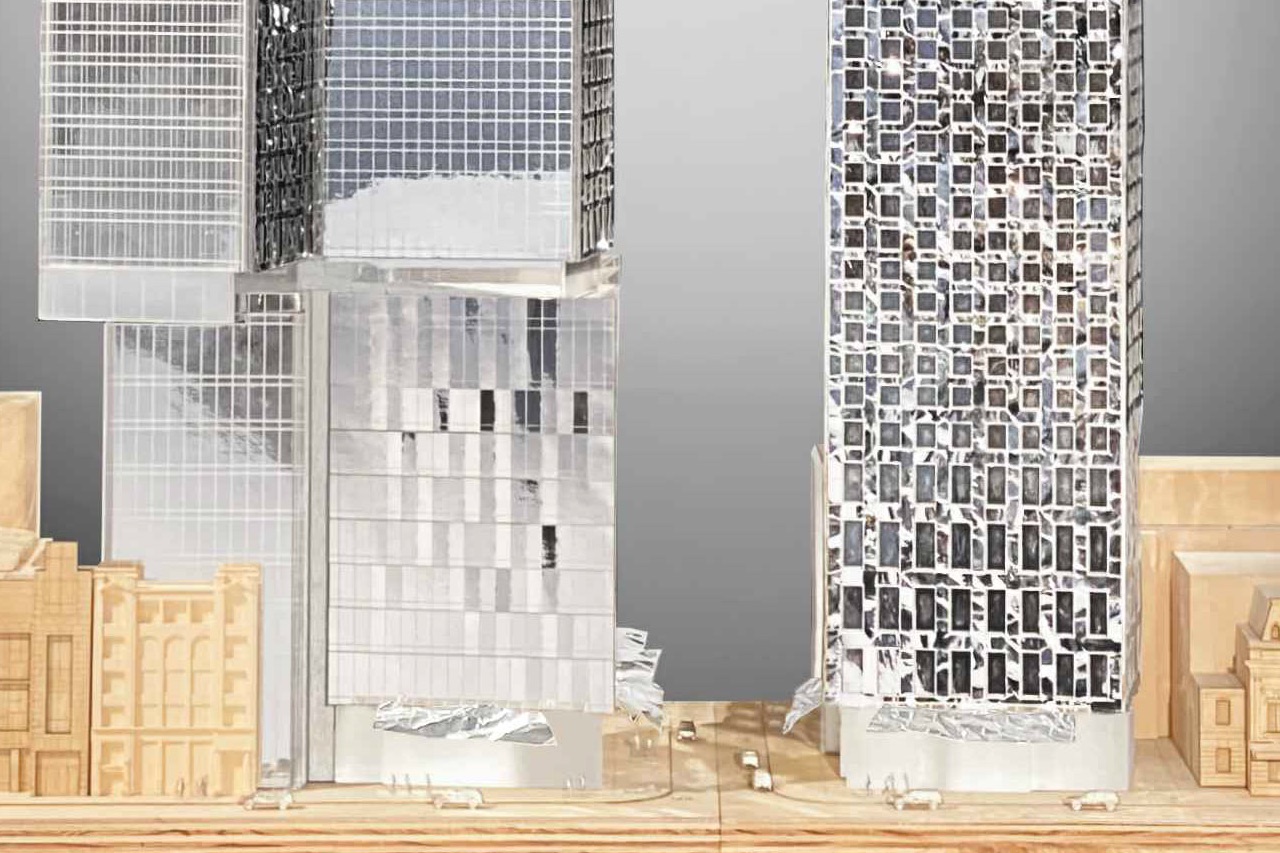 Looking north to the podium levels of Mirvish+Gehry Toronto, designed by Gehry Partners for Great Gulf, Dream, and Westdale Propteries

While we get closer to these buildings actually being buildable, and we lose many of the flourishes that were part of the initial designs, we still have buildings that promise eye-catching shifts as they rise, that boats high quality if not outright stunning exterior treatments, and one tower which will still add to Toronto’s small but growing list of supertalls.