Canadian mega-developer Oxford Properties has submitted a Zoning By-law Amendment application to the City seeking to redevelop a massive 9.2-acre Midtown Toronto site with a sprawling mixed-use complex of five office and residential skyscrapers. Dubbed ‘Canada Square’ (an existing complex of three commercial buildings on the site currently carry that name), the project, if approved, will redefine Yonge and Eglinton, one of the city’s key intersections, the centre of one of its fastest growing neighbourhoods, and an increasingly important transportation hub. 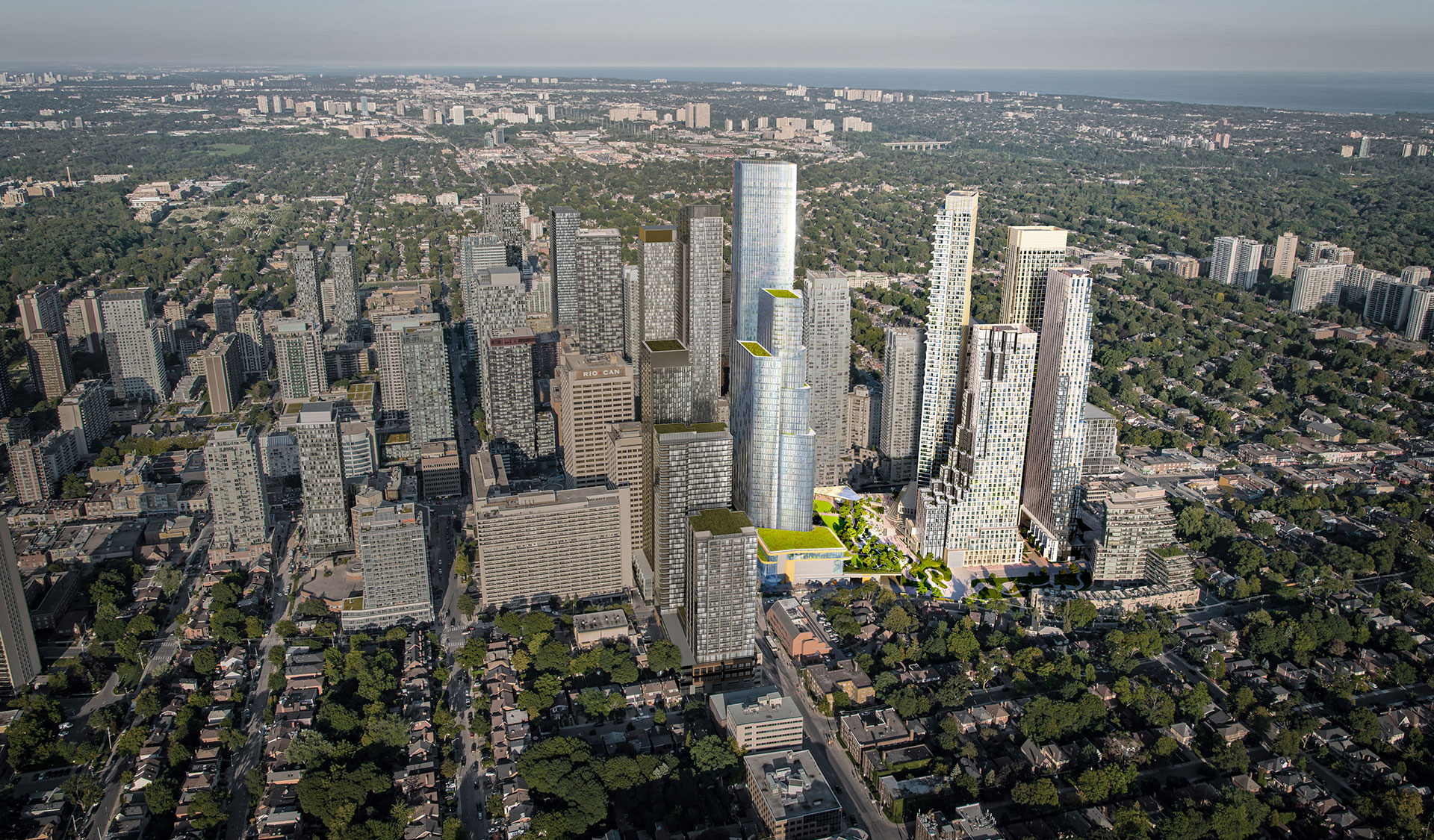 COVID has brought in a new set of risks to building office and residential spaces. Developers have had to revisit their plans to anticipate a new and uncertain set of future needs. With office vacancy rates increasing and apartment rental rates and condo prices dropping amid a surplus of new supply, it is unclear whether COVID has brought a temporary, but significant bump in the road, or might be the bell-weather that presages a longer term reckoning on property economics, city configuration and how we work and live. Despite the office and condo markets softening, Oxford and other commercial landlords appear to be banking on the return to corporate offices. This site would be Oxford’s largest development in Toronto. 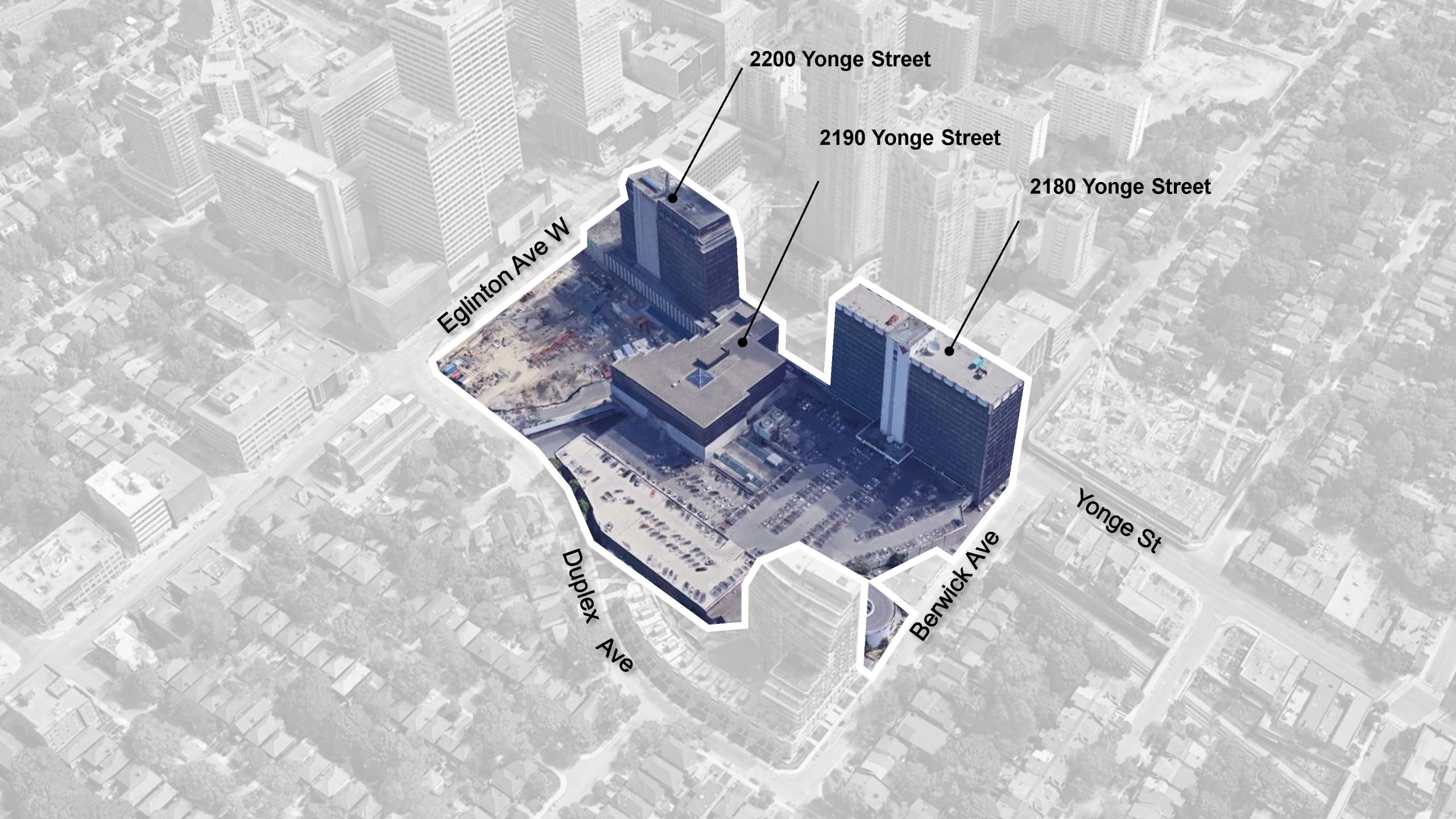 Aerial view of the project site at the southwest corner of Yonge Street and Eglinton Avenue. The Eglinton frontage (former TTC Bus Barns) has been vacant and underutilized for an extended period of time. Image courtesy of Oxford Properties.

The project site takes up the block bounded by Eglinton Avenue, Yonge Street, Berwick Avenue, and Duplex Avenue, other than its most southwesterly corner. It currently includes three office buildings, construction staging areas for the Crosstown LRT, and a significant elevated parking structure, all of which would be demolished for the new development.

Despite the excellent location and transit connectivity, this stretch of Yonge suffers from a lack of street life: the existing Canada Square buildings of 18, 6, and 17 storeys, create an unfriendly edge and relate poorly at grade. The current buildings represent 661,674 ft² of commercial space that would be replaced within the new office tower, out of a total of 3 million ft² including residential and retail. 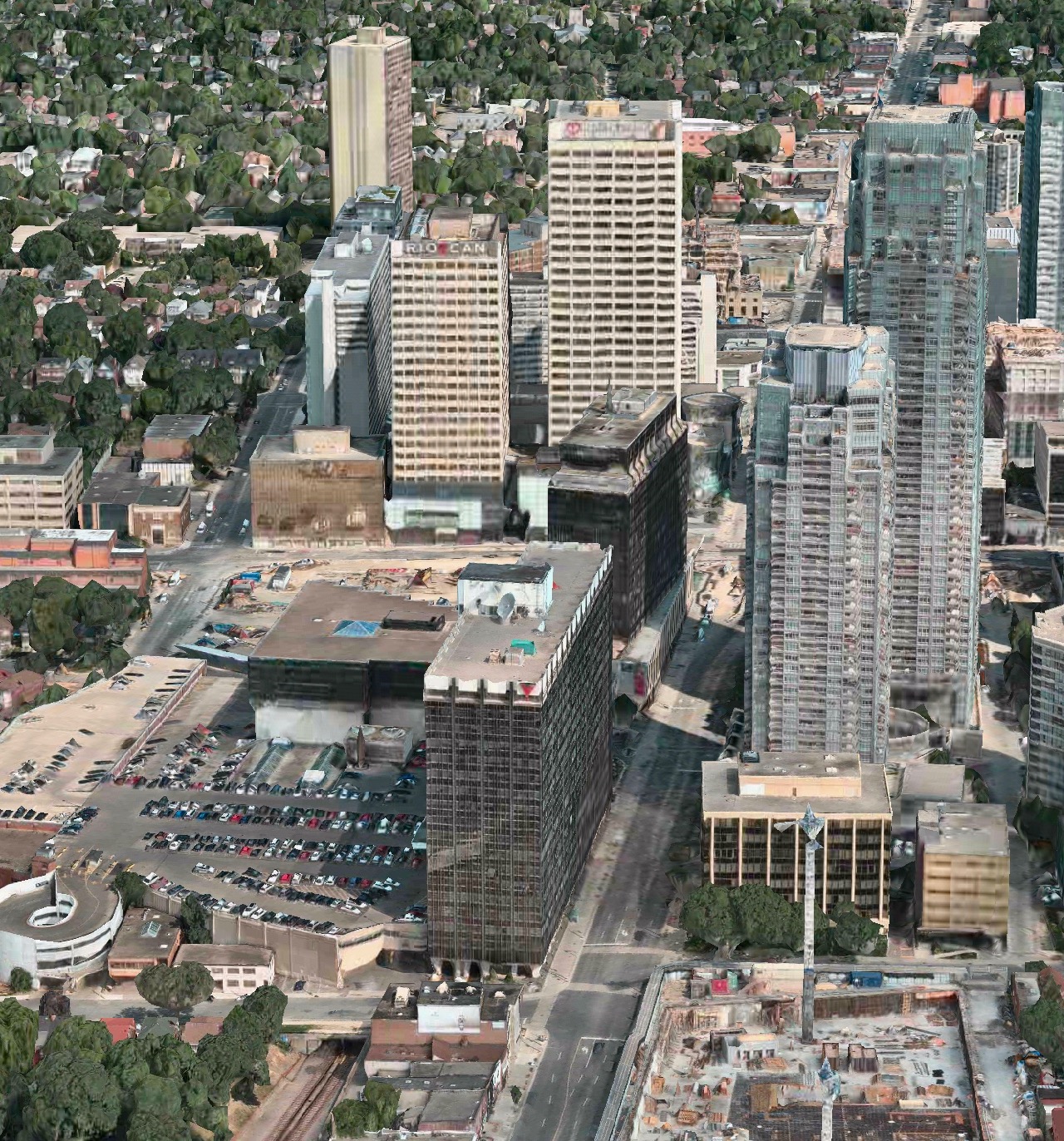 The design team includes world-renowned architects Pelli Clarke Pelli on the north precinct (they are the same designers Oxford has engaged for the $3.5B Union Park project on Front Street West: the firm has designed some of the world’s tallest buildings, including the Petronas Towers in Kuala Lumpur and the International Finance Centre in Hong Kong), Hariri Pontarini Architects on the south precinct, Adamson Associates Architects serving as Executive Architect, and landscape architects OJB. The Urban Strategies-overseen masterplan includes five mixed-use towers with AAA workspace, new housing (predominantly purpose-built rental), street-related retail, new community amenities, and improved transit infrastructure, and a park: half of the site is dedicated to landscaped open space. 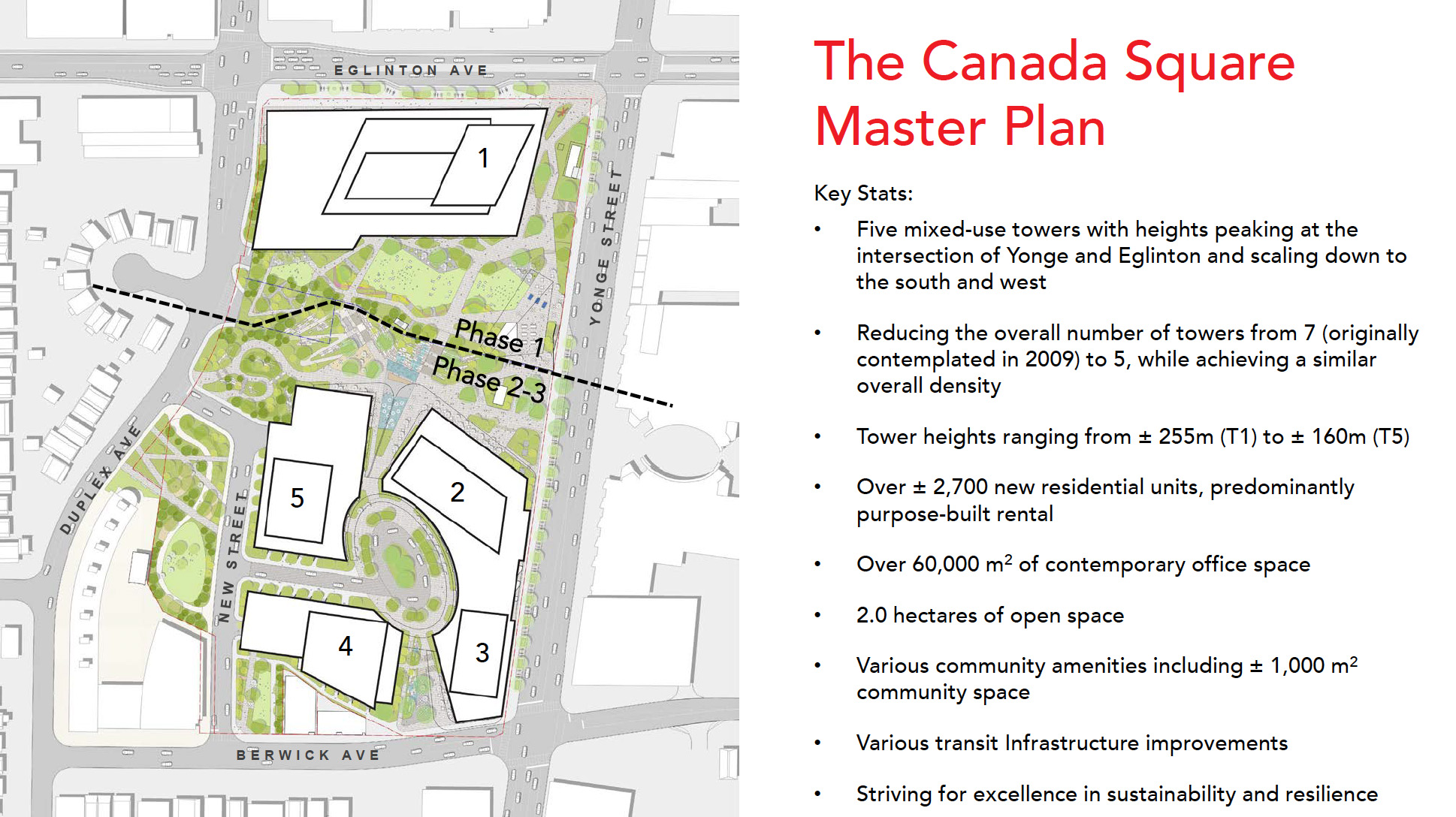 Under the proposal, the tallest building will be 60 storeys and 255 metres tall, and the shortest, 45 storeys, according to Oxford. The buildings’ heights peak at the Yonge and Eglinton crossroads, scaling down to the south and west, towards the surrounding low-rise residential neighbourhoods.

A Pelli Clarke Pelli-designed mixed-use precinct to the north of the site features a tower accommodating 650,000 ft² of office space and some 420 residential units. This precinct will be located directly above the Eglinton interchange station for the TTC’s Line 1 subway and Line 5 Crosstown LRT, the transit infrastructure—also including a new bus terminal—impacting the complexity, so the redevelopment would need to be implemented in phases and as a series of precincts. The office tower and bus terminal at the north end would be the first phase. 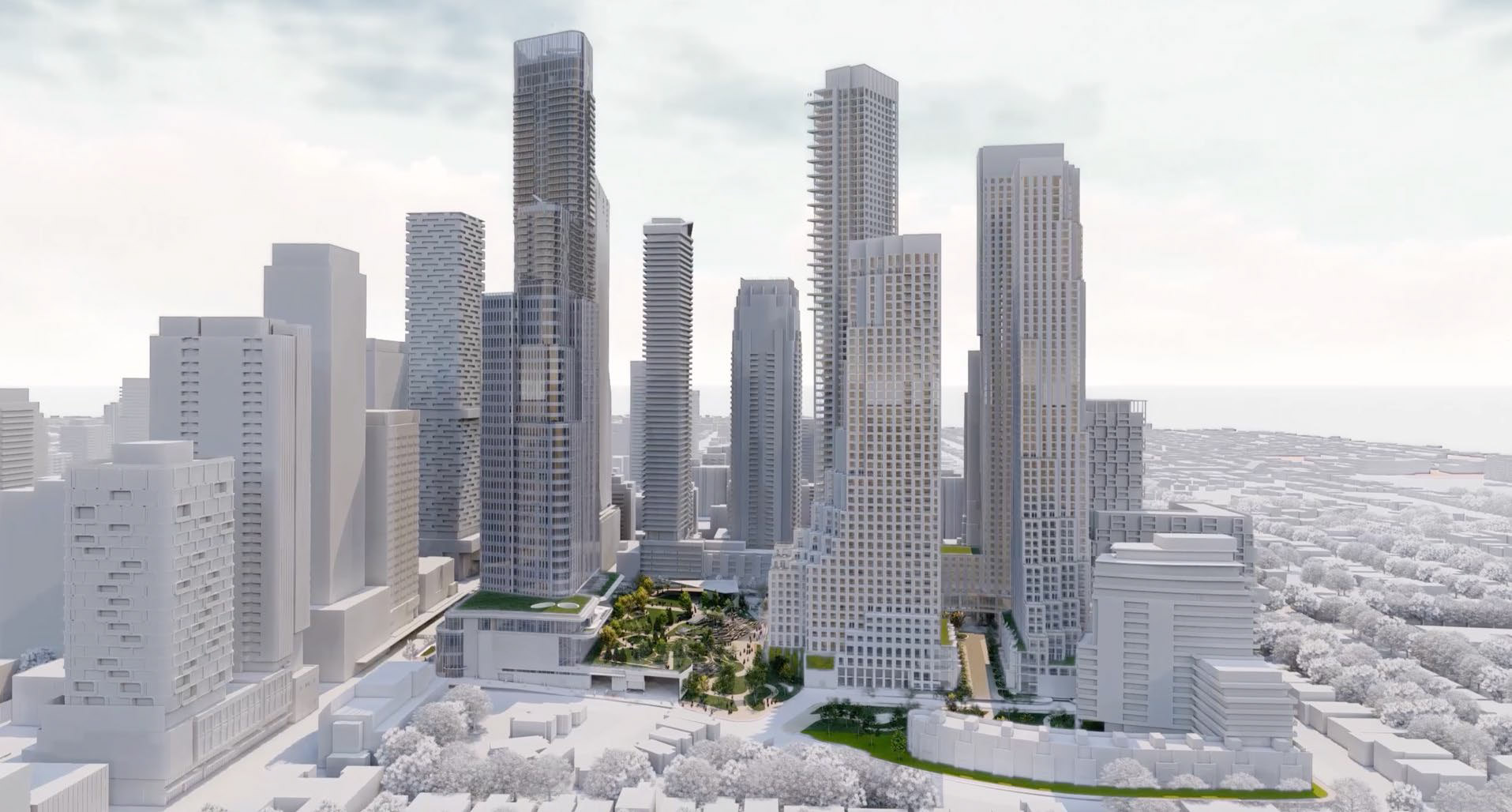 The Hariri Pontarini Architects-designed precinct to the south side features a cluster of four residential towers, all oriented around a central cul-de-sac courtyard and accessed from a new public street. The buildings would bring over 2,600 new dwelling units (45% of which are planned to be two and three-bedroom suites), street level retail, and office space for community professional services.

The OJB-designed central precinct’s two hectares of planned open spaces aims to stitch the site into its greater surroundings, creating accessible north-south and east-west linkages, and serving to bridge nearly 6m grade changes across the site. A new 10,000 ft² community space is also located here, with the potential to house a daycare centre, recreation space, or other community services. 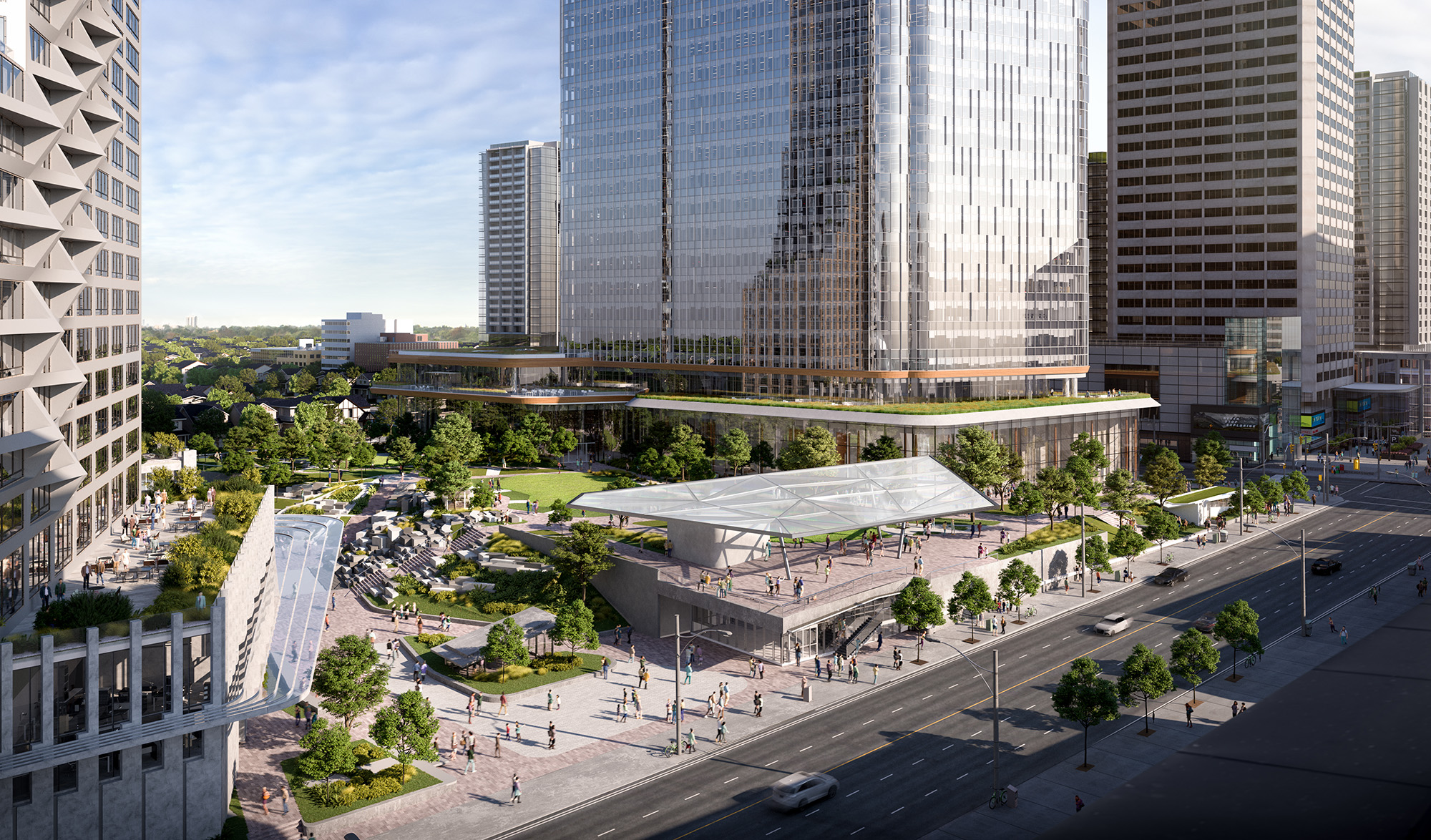 A mid-block open space beginning on Yonge stretches across the site to Duplex on the west side. Image courtesy of Oxford Properties.

Public consultations with the community are ongoing. COVID has highlighted the important role of open space in our city. Local Councillor Josh Matlow has been a longtime key advocate in championing much-needed “remarkable public space” for this neighbourhood. Matlow also sees the Canada Square site as an opportunity to create some “social support and infrastructure” that is missing from a community that has been dealing with unprecedented levels of residential development over the last decade. “We don’t want Yonge and Eglinton to just become a bedroom community in the sky. We want it to be a complete community with jobs,” Matlow explained, “where those of us who live in the area are able to walk to work rather than have to rely on an overcrowded subway system or have to drive—a place where people can work, live and play. That’s a complete community.”

If the plan is approved, construction would start after the Crosstown LRT project is finished in Fall, 2022. The first phase of the project is expected to take up to five years to complete.

EDITOR’S NOTE: This article has been updated to note more specifics about the design team and the number of proposed multi-bedroom residential suites.