Adding to the palette of clean modernism to the backdrop to Toronto’s iconic City Hall, the new Ontario Court of Justice is approaching its final height of 17 storeys. As the building climbs closer to its structural peak, the rapid installation of its exterior materials is offering up a better taste of the project’s detail-oriented design by world-renowned Genoa-based architects Renzo Piano Building Workshop, working with Toronto-based NORR Architects. 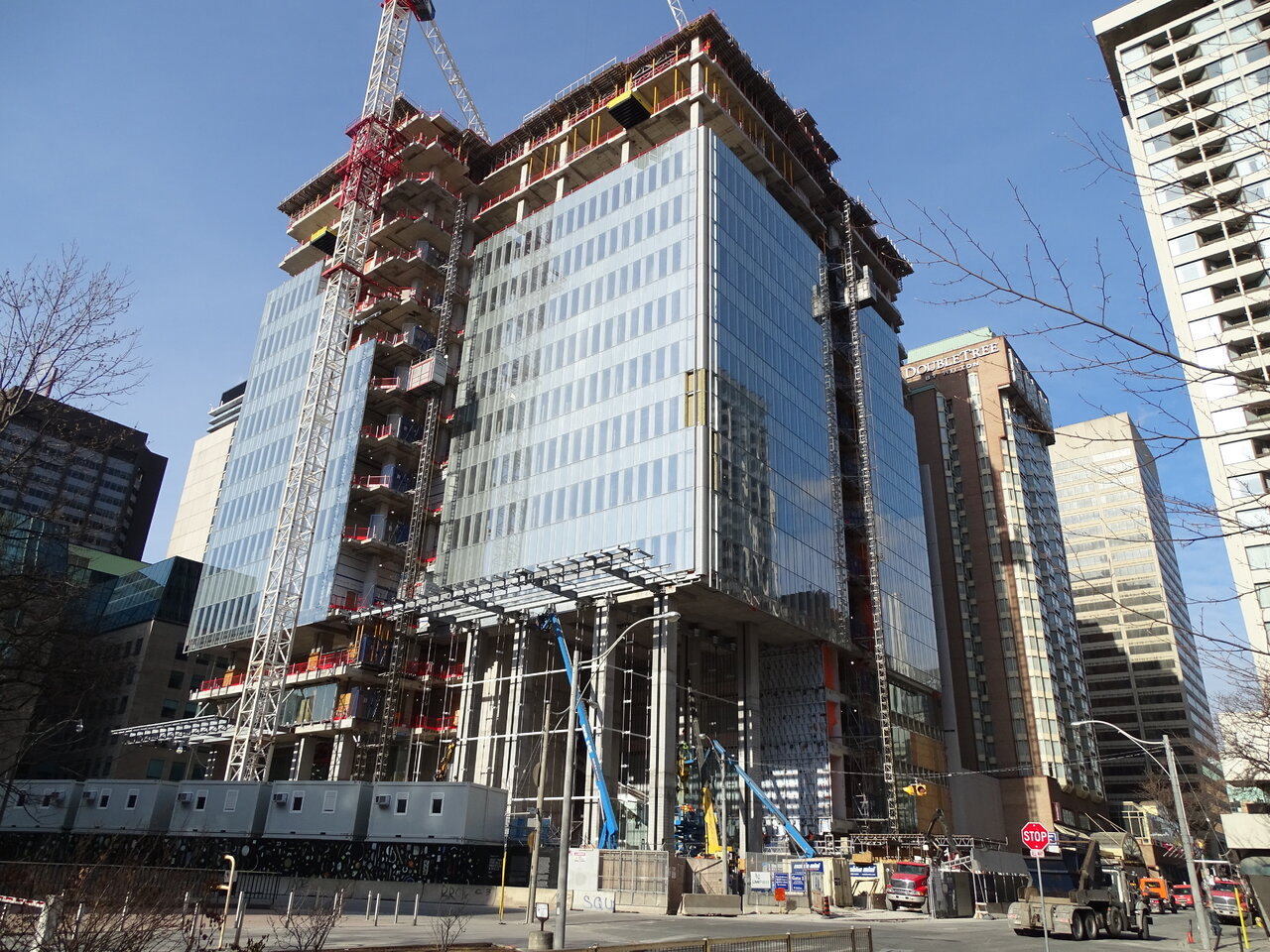 We last checked in on construction in late July, when forming had progressed to the eighth and ninth floors of the building, bringing it to about its halfway point on the way to a final height of just over 95 metres. Half a year of construction later, the building is now having its final 16th level formed, and will soon top out. The final level will be constructed with structural steel, instead of the poured concrete construction used for the majority of the forming. 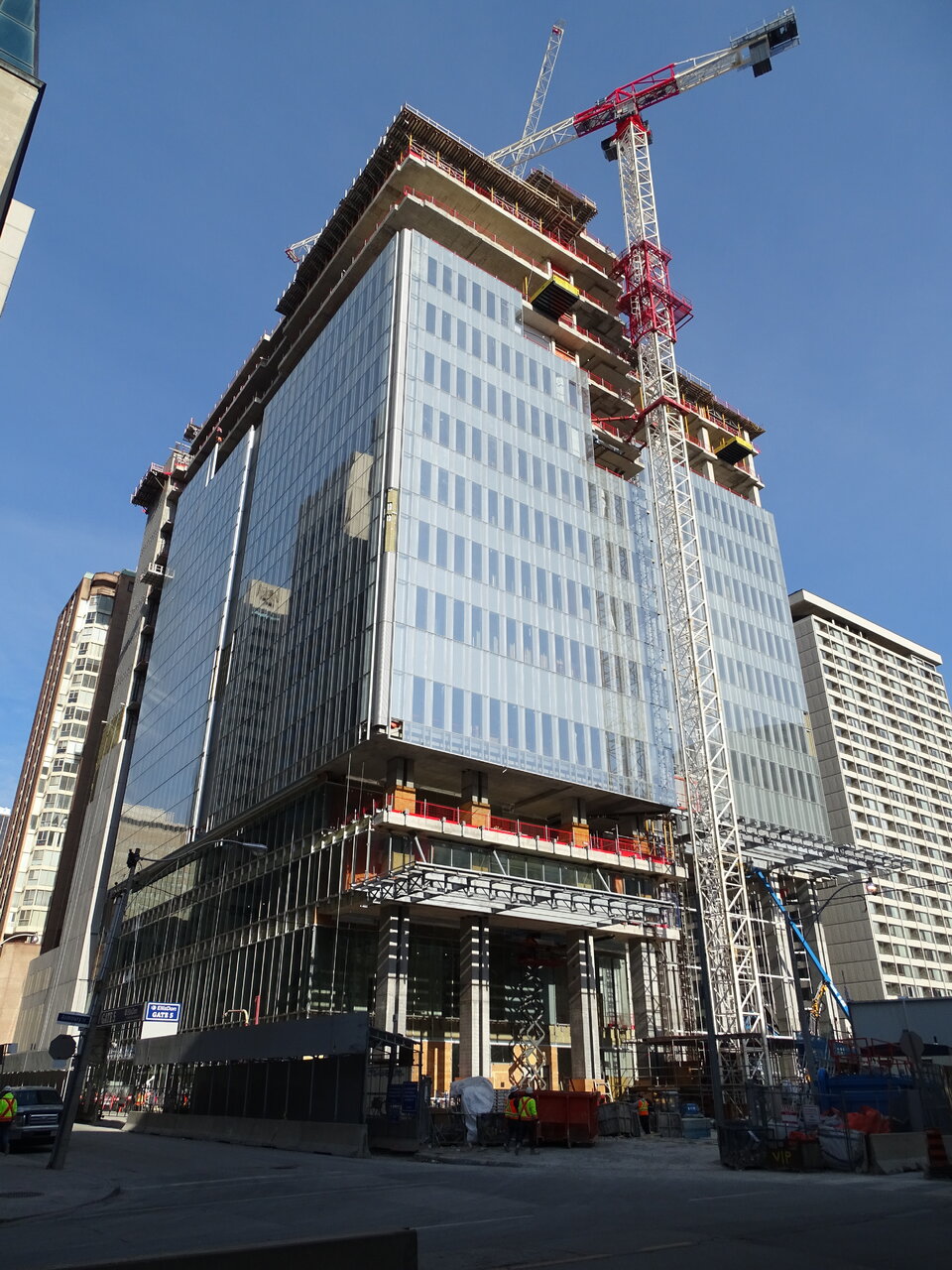 As it rises taller, the new institutional building has added to the axial terminating vista at the north end of York Street. Framed symmetrically in this north-facing view from Adelaide and York, the building rises behind the Neoclassical Osgoode Hall. 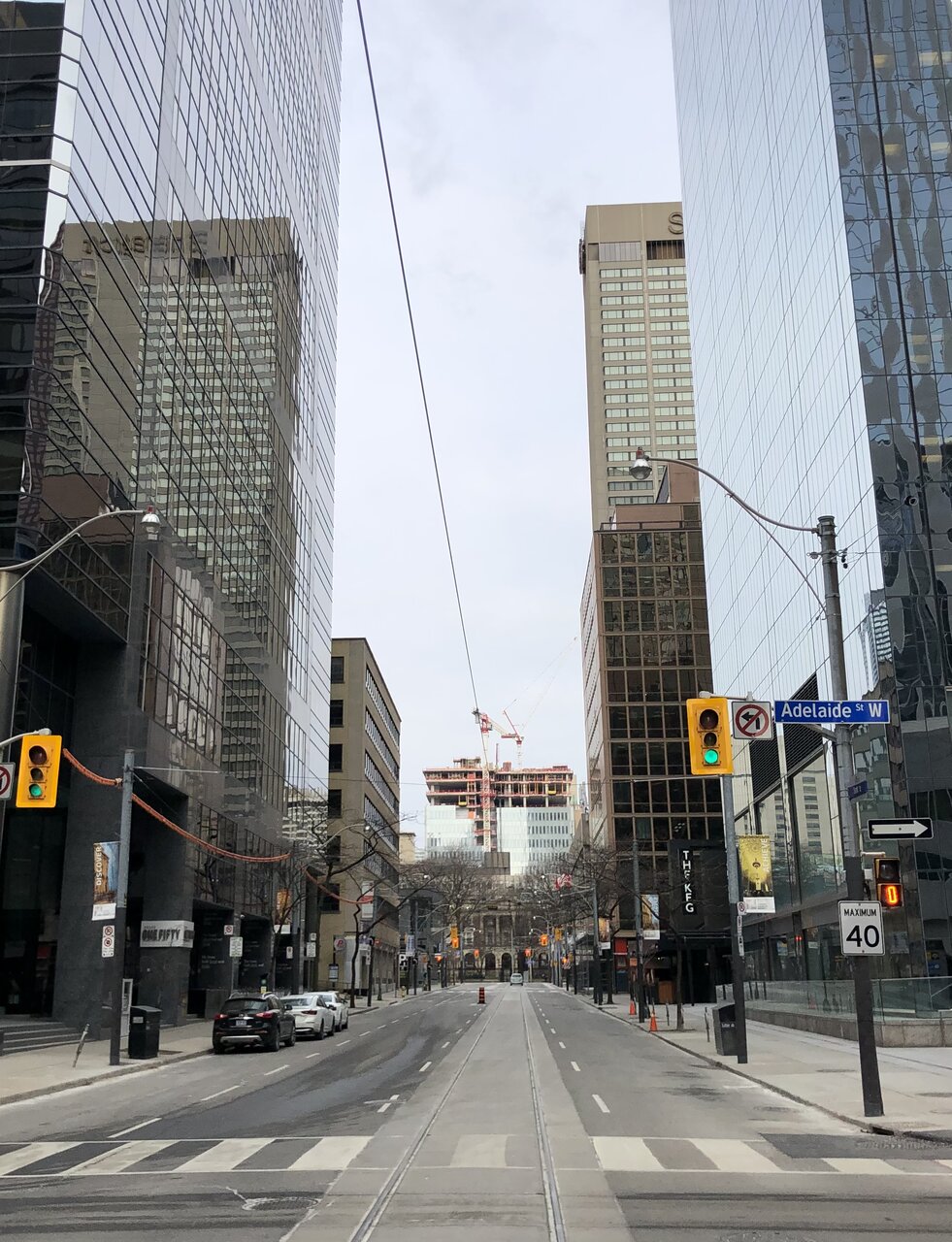 In the months since our last update, the installation of the building’s exterior envelope, a custom unitized curtainwall glazing system, has enclosed most of the tower levels. It has several components, including double-glazed, low-iron vision glass, corrugated sheet metal shadowbox panels, powder-coated aluminum mullions, and rounded corners formed by a free edge of glazing enclosed by an aluminum C-profile. These finishes have been installed as high as the 12th floor. 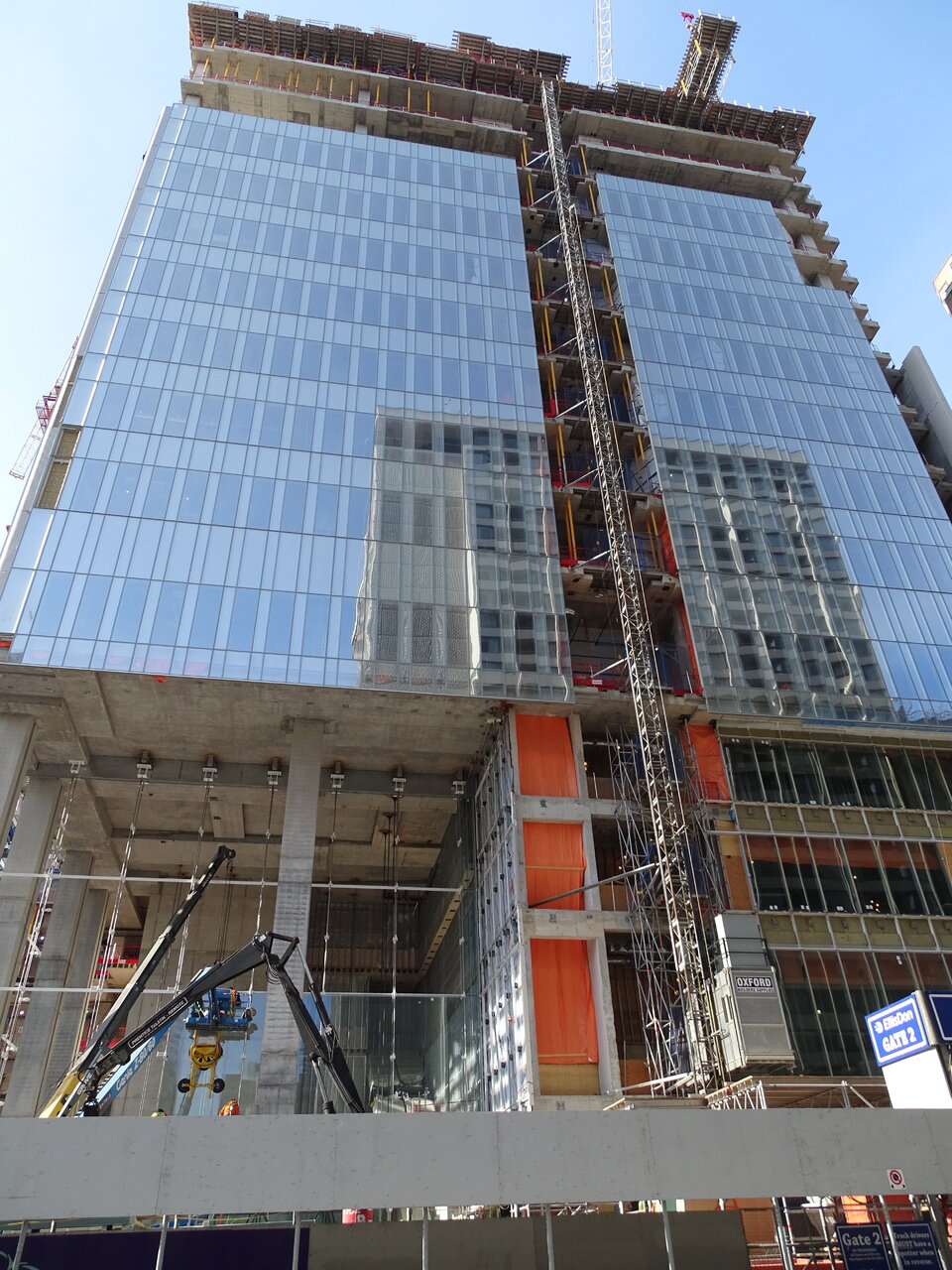 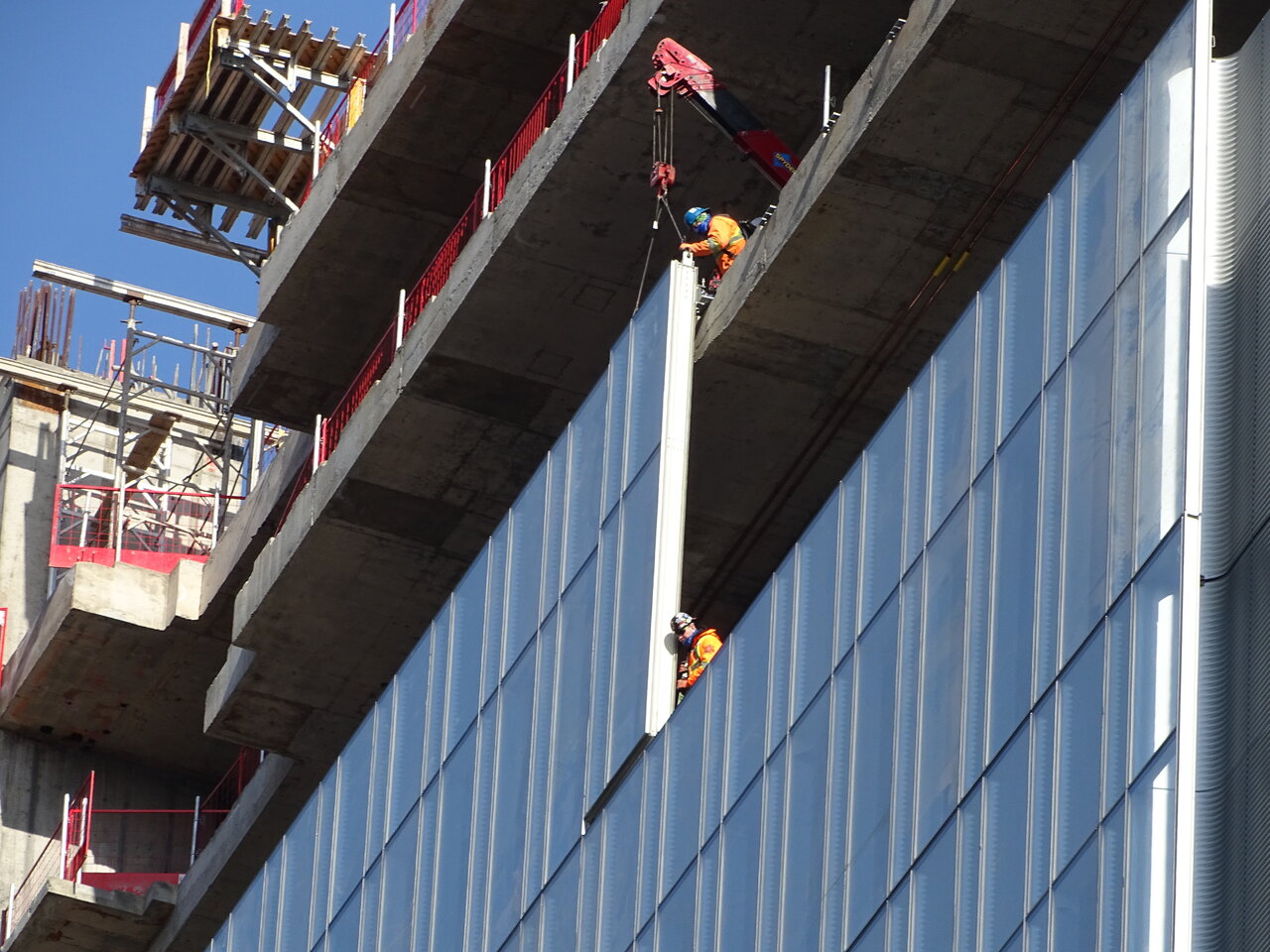 At street level, the remaining formwork and scaffold installations that obscured much of the building’s grand atrium in our previous update have been removed, revealing the scale of the four-storey space. It is now starting to be enclosed by a steel cable glazing system along the atrium’s east and south elevations to which the first panels of this glazing are now in place—a laminated low-iron glass with ultra-high visibility—as high as the second floor. 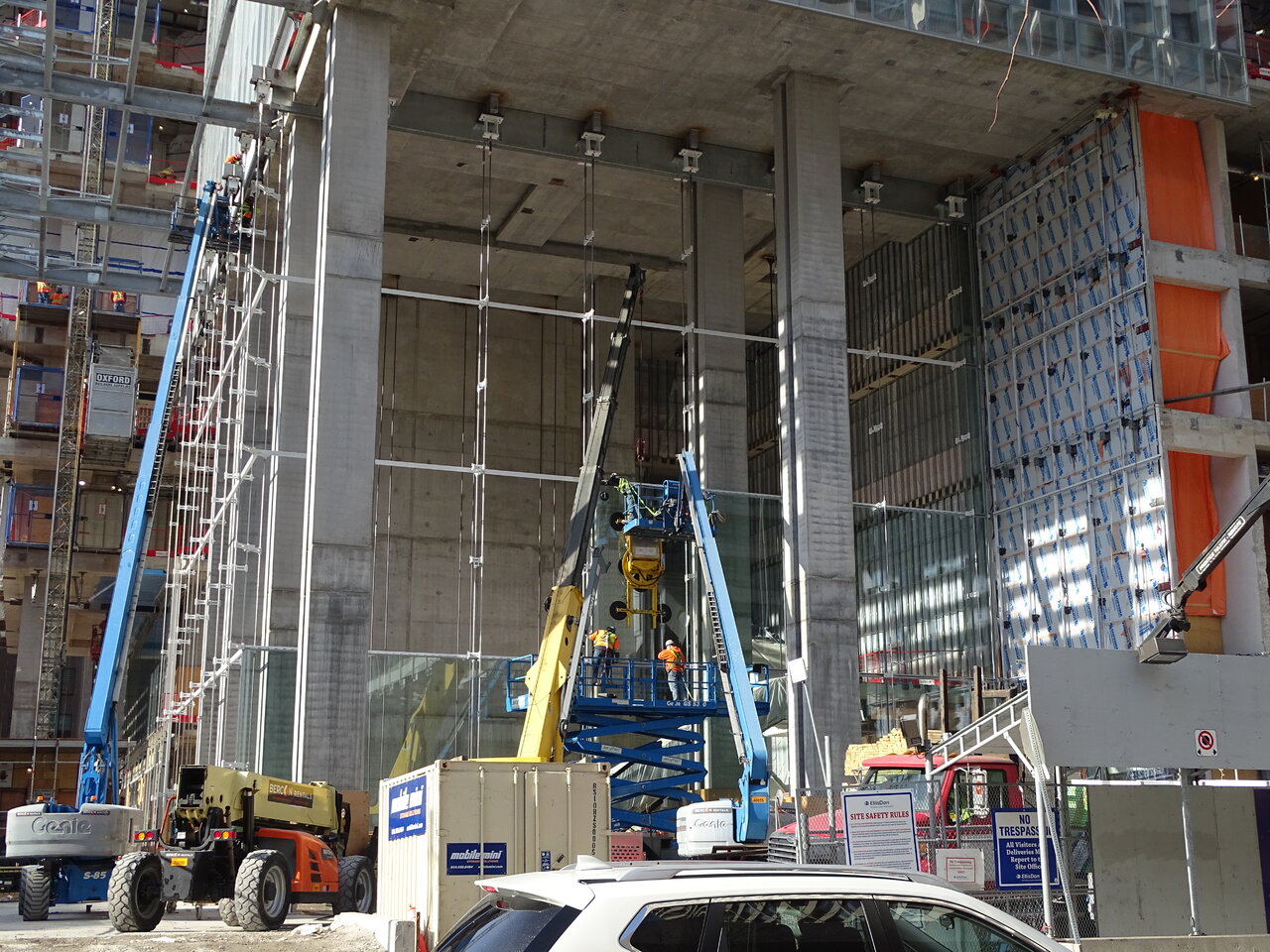 Not pictured in this article, the lower levels of the building’s western Centre Street side, where the judges’ entrance will be found, are being finished in a mix of low-iron double glazing and an architectural precast concrete with textured shadow gaps.

A late 2020 report by Infrastructure Ontario indicates that interior work had progressed as high as the 11th floor, all escalators had been installed, and the first delivery of elevators had arrived on site.

The project is anticipated to wrap up construction Spring, 2022. Once complete the new court building will house 63 courtrooms including a multiple accused, high-security courtroom, and ten conference/settlement rooms. 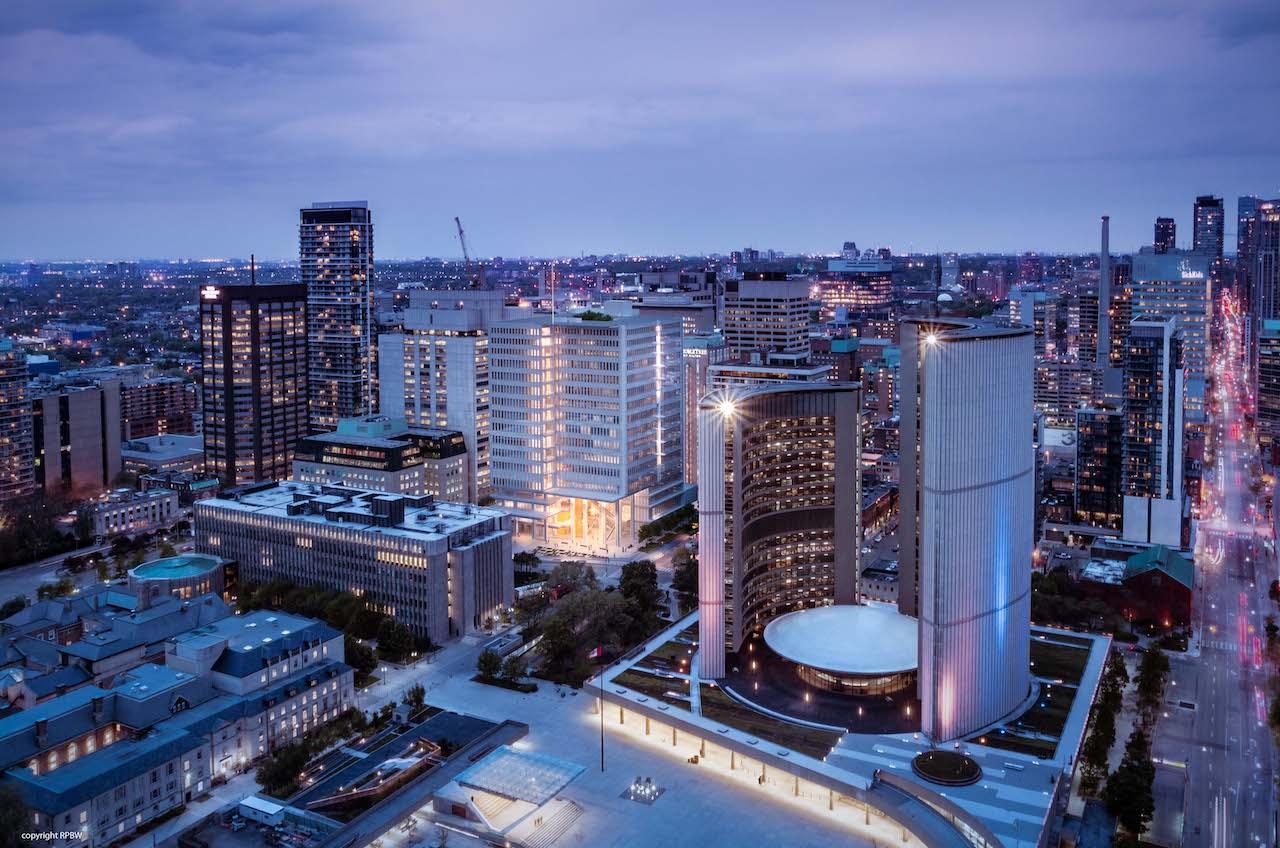 Looking northwest to Ontario Court of Justice, image via submission to City of Toronto

Additional information and images can be found in our Database file for the project, linked below. Want to get involved in the discussion? Check out the associated Forum thread, or leave a comment below.